Latest inflation figures offer no firm evidence that price pressures in the US economy have reached their peak, putting pressure on central bankers and Wall Street. 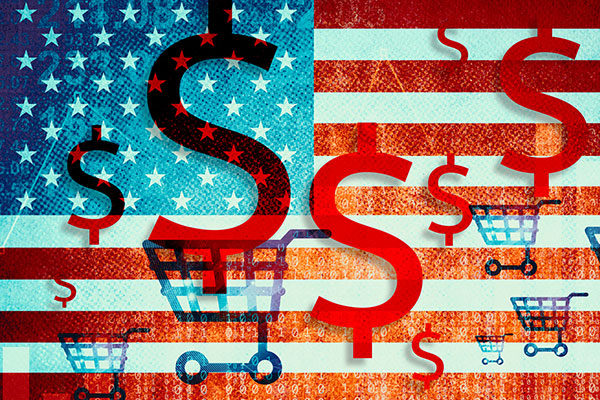 Stock markets came under more pressure today as an acceleration in the US inflation rate to over 9% left investors fearing even steeper interest rate rises.

Before this afternoon’s release, Wall Street had expected the current Federal Reserve funds rate of 1.75% to go up by 0.75% for a second meeting in a row in a couple of weeks’ time.

Today’s inflation reading for June of 9.1% means there’s now a much greater chance of a third dose in September as well, or even a 1% rise at the next meeting. Having fallen back in recent days, US futures markets are pricing a rate of more than 3.5% by the end of the year.

The US 10-year bond yield, which is the benchmark used for many household and corporate borrowing costs, rose back above 3% as a result. Stock markets also weakened amid fears about the consequences of tightening monetary policy into an already slowing US economy.

The S&P 500 index, which has dropped by around 20% this year, opened 1.5% lower and the tech-focused Nasdaq lost another 2% on top of a similar fall yesterday.

Stocks whose valuations are built around future cash flows were among the casualties, with Tesla Inc (NASDAQ:TSLA), Apple Inc (NASDAQ:AAPL) and Microsoft Corp (NASDAQ:MSFT) all trading lower. The FTSE 100 index was down 1%, but this was similar to earlier in the day as the benchmark’s heavy weighting of international earners benefited from the ongoing strength of the US dollar.

The greenback is its highest since 2002 against a basket of six major currencies and this week reached parity against the euro, reflecting concerns that the European Central Bank’s own efforts to curb inflation will be hampered by energy shortages.

As well as being the highest reading since November 1981, today’s inflation figure offered no firm evidence that price pressures in the US economy have reached their peak. The headline figure of 9.1% was much higher than the 8.8% forecast and was driven by a 41% surge in energy prices, with food costs also up 10.4% at a four-decade high.

Excluding food and energy, the core inflation figure of 5.9% was slightly below May’s 6% return but above the 5.7% forecast.

The response of the US economy to the inflation and aggressive interest rate rises has been mixed so far, with Friday’s employment report showing the creation of 372,000 net new jobs, a figure about 100,000 more than expected.

However, the number of Americans submitting new claims for jobless benefit rose last week, with layoffs hitting a 16-month high in June. This chimed with the earlier ISM services survey, in which the employment component dropped to a two-year low.

As a result, analysts at UBS think further US dollar upside is likely to be capped by market perceptions that the Federal Reserve will have to cut rates again in 2023 in response to slower economic growth.

Bank of America is also now forecasting a mild US recession this year, with a fourth quarter decline of 1.4% to be followed by a 1% increase in 2023.