I've delayed writing this article after reading Games Workshop's annual report, but I still haven't calmed down. The act of typing is riling me up again.

As an investor and as a journalist, I try to be objective. While objectivity isn't ever completely possible, my feelings about Games Workshop are so extreme I question whether I can write anything useful about the company, let alone own shares.

My frustration starts with page 1, which summarises Games Workshop's performance in the year to April 2016. The table reveals that revenue has fallen marginally. Profit derived from that revenue has fallen 27%. Games Workshop sells fantasy miniatures, collectibles and models for its Warhammer universes, which people assemble, paint, collect, and use to play wargames.

The overall result is no disaster, though. A dramatic surge from an additional source of income, royalty payments, came to Games Workshop's rescue. Computer game designers license the Warhammer characters and mythology to use in games they design and market.

The fall in revenue rounds to 1% and profit increased 2%. But these statistics miss the point. The company's goal is: "...to make the best fantasy miniatures in the world and sell them globally at a profit, and it intends doing so forever." Royalties are variable and largely dependent on the labours of other firms.

Revenue, on the other hand, is dependent on Games Workshop, and it fell in the previous two financial years as well. Despite flip-flopping between expansion and efficiency drives, the company hasn't convincingly lifted revenue since a sustained and dramatic period of expansion in the 1990s. 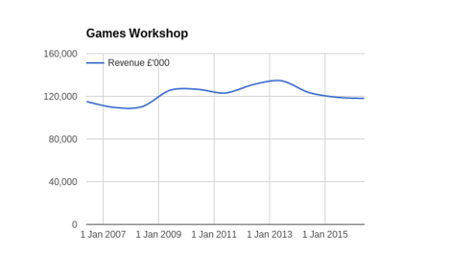 Generally rising prices over the period, combined with stable revenue, suggests Games Workshop is selling fewer miniatures. Maybe the hobby's popularity is diminishing, albeit to a pool of big spenders.

On page 6 a single sentence explains the fall in profit. The company spent more on opening new stores and the depreciation charge on its new HQ, which doubles as a kind of theme park for hobbyists, also ate into profit.

The firm is committed to returning cash it doesn't need for investment to shareholdersInevitably profitability has fallen. A chart on page 8 of the annual report shows return on capital fell from 40% in 2015 (and a high of 59% in 2013) to 27% in 2016. All of these numbers are impressive, particularly since the profit measure used in the calculation excludes royalties.

The capital measure excludes operating leases though, the capitalised cost of renting stores, primarily. I can only roughly factor those in, but doing so still results in a reasonable return on capital of 11% for 2016.

Since Games Workshop created, owns, and only it can legally profit from manufacturing miniatures for Warhammer and its futuristic derivative Warhammer 40,000 - and they are loved by a large and devoted base of hobbyists - it should be an attractive investment proposition. Especially as it is committed to returning cash it does not need for investment to shareholders.

But I'm not confident about Games Workshop and the reason isn't, specifically, one of the putative challenges put up by naysayers over the years: the emergence of competing model and game designers, videogames, the availability of counterfeit models on the Internet, or the possibility that in future modellers might print their own miniatures using 3D printers.

The core customers are modellers who may never play the gameThose may or may not be or become significant factors holding growth back. I simply do not know. Games Workshop is a unique business, and it vacillates between denying potential threats, and ignoring them. In this year's annual report, it chose not to say a word about them.

More than these threats, management seems to fear its own stakeholders; customers (trade and individuals), shareholders, and employees. Gamers, who complain on the Internet that price rises and rule changes are driving them away from the game are dismissed. The core customers are modellers who may never play the game - yet my impression remains that the game is the gateway to recruiting new modellers.

Sections of the annual report read like propagandaI don't usually assiduously note page numbers in annual reports, but the information I need in Games Workshop's report is split up among pages that either rebut critics or extol the company's mission. These sections read like propaganda to me. Perhaps 90% of chairman Tom Kirby's statement, which opens the annual report, is a broadside against institutional shareholders who voted against motions at last year's Annual General Meeting.

One of those motions allowed Games Workshop to pay non-executive directors, notably Kirby, consultancy fees for unspecified services beyond their duties. Kirby, who sits on the remuneration committee, earned £60,000 from his consultancy agreement between March and December 2015, when it was terminated. He now receives a fixed annual fee of £250,000, more in-line with what an executive director might expect. The new arrangement will be put to a binding shareholder vote at this year's AGM.

Is he worth it?

Kirby may be worth it - the annual report doesn't divulge what he does - but his defence of the board is symptomatic of Games Workshop's communications with stakeholders. It doesn't detail the specific complaints, or answer them. I pieced the facts about his remuneration together from the footnotes at the back of the annual report. Instead, his statement rolls through aspects of corporate governance and insists that, though it might not look like it, Games Workshop complies in spirit.

The report gives the impression of a company run ruthlessly from the top downMany companies choose to thank workers in their annual reports, but chief executive Kevin Rountree - and Kirby when he was chief executive previously - routinely identify them as the business's biggest risk. Bigger than the five other internal risks listed, and, presumably, the external risks it does not deem worthy of mentioning.

He says: "In my opinion the greatest risk is the same one that we repeat each year, namely, management. So long as we have the right people in the right jobs we will be fine. Problems will arise if the board allows egos and private agendas to rule. I will do my utmost to ensure that this does not happen on my watch."

It's the emphasis that's so odd. The whole annual report, like previous ones, is didactic, giving the impression of a company run ruthlessly from the top down. Games Workshop brooks little criticism and I wonder how long an organisation run that way can remain healthy.

This is the source of my extreme frustration: 2016 was a relatively bad year for the core business, yet Games Workshop is healthy. A share price of just under 490p values the enterprise at just over £200 million, or 13 times adjusted profit (including royalties).

The earnings yield, albeit buoyed perhaps unsustainably by the royalty bounty, is a reasonably attractive 8%. Kirby is an owner-manager. By most of the measures I use to weigh the merits of a long-term investment, Games Workshop scores highly.

Instinct, though, tells me not to trust the board, not because it's knowingly dishonest, but because unknowingly it believes its own hyperbole and only really listens to compliant customers, shareholders, and employees. If it's on the wrong track, the board's stubborn insularity is likely to keep it there.

Though I have learned instinct is usually a poor way to judge an investment, my gut feeling is so strong I'm finding it difficult to suppress. Games Workshop isn't just making an enemy of me, it's putting me at odds with myself!