It's been battered for four years, but companies analyst Edmond Jackson thinks these 'cheap' shares targeted by short sellers are at an inflection point. 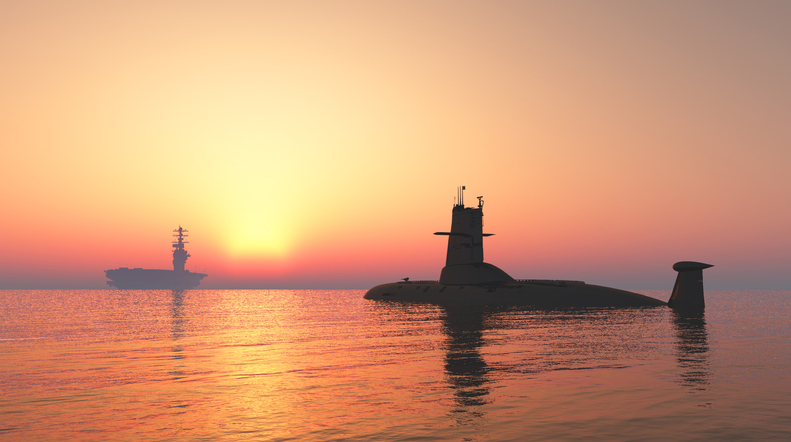 Does circa 600p finally mark a turning point for shares in mid-cap engineering and defence group Babcock International?

Despite useful volatility in 2018, market price has maintained an overall downwards trend from 1,300p in 2014 to as low as 580p just recently.  Babcock has appeared rather on the ropes amid negative news and critiques, also serial profits downgrades, although its directors have bought stock meaningfully and the short-selling element may have peaked.

Boatman Capital Research has just made a typical attempt at stock manipulation – circulating a negative report to the press, its perpetrators staying hidden.

It makes various criticisms along lines of "burying bad news about performance" and leadership "not being up to the job" – e.g. overpaying in a £1.6 billion deal for Avincis, one of the world's largest providers of search-and-rescue helicopters, in 2014; and treating the Appledore shipyard in Devon as a cash cow with no new business achieved.  Yet the broad thrust isn't new, and this noise trader’s intervention could mark a climax to negativity.

Babcock has tried to blow such claims out of the water, strongly refuting "many false and malicious statements" which initially helped the stock up to 625p, currently 615p.

Management re-asserted its profits guidance last September amid plans to exit smaller low-margin businesses such as Appledore, also to re-organise oil & gas services.  The UK government has been co-opted to make supportive words, although the 12 November update doesn't address specific claims about delays/losses on a light tank renewal programme. 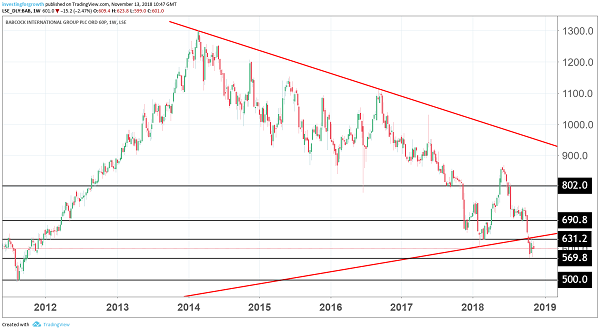 Source: TradingView (*)      Past performance is not a guide to future performance

Consensus forecasts appear to have progressively reduced this year, from £493 million to £373 million normalised pre-tax profit for the financial year to March 2019, and, if the latest dated 4 September are fair, then a further cut to £286 million for this year and £305 million in 2020. However, if earnings per share (EPS) targets in a high 70p range are only reasonably in line, the rating is cheap.

After investors have seen various support services groups disappoint, the obvious concern is "cheap for a good reason" e.g. after Carillion highlighted a trend towards uneconomic margins in contracting, and given the Brexit fiasco, potentially a radical-left Labour government that's against private sector outsourcing.

If forecasts are fair then the prospective dividend yield is around 5% covered some 2.5 times by earnings and a strong cash flow profile – notwithstanding concerns I expressed last July, about how a working capital increase had caused an 18% reduction in net cash generated from operations.

So, it's not too surprising that the near-term chart looks as if it's trying to establish a floor after another slide from 700p at the start of October, when stocks sold off generally.

Management has just affirmed "a healthy financial position with cash flow reducing debt" and interims will be published on 21 November "when we look forward to providing a detailed update on our performance."  So potentially this could help build a recovery in the stock.

Source: Company REFS          Past performance is not a guide to future performance

Mixed signals in a volatile but overall falling trend

My 'Accumulate' at 630p idea last February is in the dock given 580p marked an 8% drop, it being vital to re-evaluate lest fundamentals are changing besides sentiment.  At 630p, the stock has halved in market value over four years despite a published record showing a respectable trend in revenue, earnings and cash flow, also operating margins fairly consistent around 8%.
Contemporary cynicism towards accounting doesn’t square with four of Babcock's directors buying nearly 180,000 worth of shares after the November 2017 interims, at prices from 667p to 693p, and a 6.7% short position would eventually reverse.

Such a reading was initially confirmed by the share price soaring nearly 40% to over 860p, although it fell back below 720p after a July AGM trading update trimmed revenue guidance to low single-digit growth from mid-single-digit – due to a claimed "temporary slowdown" in defence and marine work.

Three non-executive directors then bought a total £143,741 worth of shares at 717p to 737p, and, when updating afterwards, I retained my 'accumulate' stance.

Yet there's been a pattern of Babcock going on the defensive - at end-July against a "misleading" press report after the Ministry of Defence said it had decided not to proceed with a proposal from Babcock relating to armoured vehicles maintenance.  And it seems possible to draw a line between Boatman's latest critique and one from Morgan Stanley last December that cited concerns about visibility on growth and margins, also working capital issues and factors outside the company's control.

At the time, Morgan's analysts downgraded their target price from 975p to 800p, worth bearing in mind after the latest slide from 700p to around 600p during a difficult October for stocks generally.  Note also, the short position has reduced from 8.6% in early October to 6.95% currently.

Dissatisfaction with the chairman, apparently

There appear doubts over Mike Turner's stewardship – although he is non-executive chairman. RBC recently downgraded its stance from 'outperform' to 'sector perform' because "given current low credibility, strengths such as Babcock's relationship with the Minstry of Defence, high barriers to entry and a long-dated order book are likely to remain overlooked."

Yet this feels quite like pinning the blame on personal issues when an investment bank can't pinpoint fundamentals to justify why its stance hasn’t worked out.  Caution is justified given Babcock's newsflow has involved various setbacks lately, but if a stock falls relative to expectations, then you need to consider firmly whether it's a 'sell' or a candidate to average down i.e. 'add'.  'Sector perform' or 'hold' is a cop-out unless you lack vital information.

My purpose in updating now is to suggest probability favours 'add' and to set the 21 November interims in the frame as a potential hinge.

If confidence in the chairman is really an issue, then it's one of the easiest to fix if shareholders want.  On such logic Babcock could become a target for an activist fund.

A research note from Liberum, an independent broker, makes a case for how this news from October's budget was "marginally helpful" despite a context of the National Audit Office declaring on 1 November, the Ministry of Defence's 2018 to 2028 equipment plan "remains unaffordable" and the gap could be £14.8 billion.

Toshiba's closing a "NuGen" new nuclear development plant near Sellafield is seen as a "small long-term negative", but the analyst is more optimistic about Wylfa nuclear power station on Anglesey – Babcock having the UK's largest specialist nuclear support operation.

Liberum reckons the 2019 PE multiple is actually as low as 6.8 times: "simply too low, why we felt confident choosing it as a key pick..."  I'd continue to take care, Babcock remains quite a complex group to assess, hence an element of speculation but, all considered: Add.