Any time you lose no money on a failed trade feels almost like a success, argues this top technical analyst. Here’s how he does it. 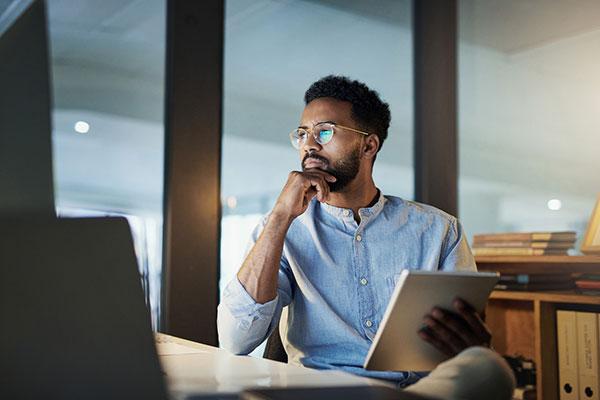 I believe most traders/investors do not have a 100% success rate in their trades/investments if they have been active for a while. Most would acknowledge that fact. And most would agree that to make a good trade/investment, the timing of the entry (and exit) is absolutely crucial to the success or otherwise of their actions.

And that brings the concept of risk into clear focus.

In an extreme case, say you bought a share at 100, and then watch it slump to 50 in two years, before rising to 120 in three years. Would you call that a successful operation? I would not, simply because the holding of a losing position for two years tied up precious capital that you could have potentially profitably employed elsewhere. Two years is an eternity in some markets!

That is why I spend much time and effort trying to time my entries as close as possible to the start of a major rally phase. In that way, if the market goes according to plan, I start off with a winning position and my initial risk is small. That surely must be a major goal of anyone.

But of course, all budding rallies can be nipped in the bud by subsequent market action – and the Japan 225, the Nikkei, is a current case in point.

I covered this index for my COTW of 6 September, and this was the chart I posted that I used to offer a buy recommendation: 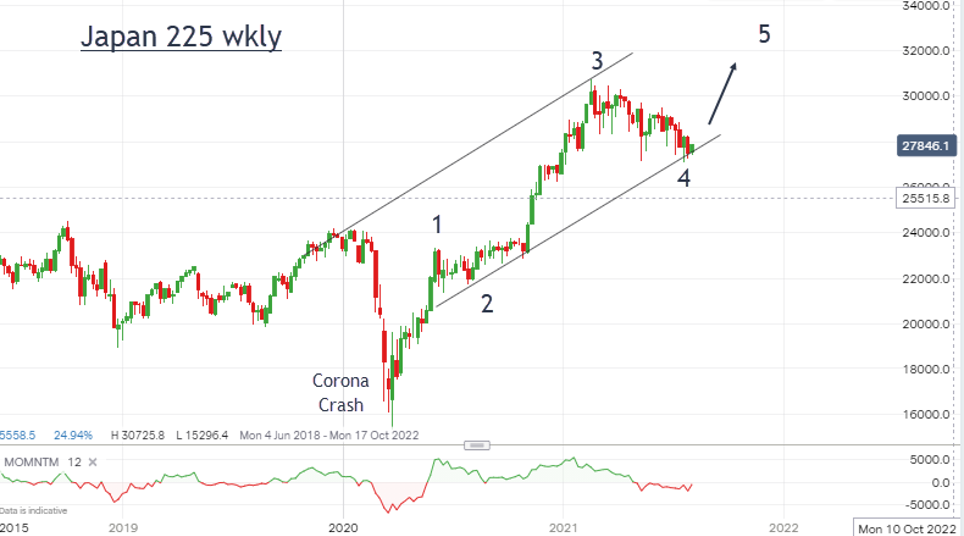 From the Corona Crash low of March 2020, the index climbed hard in common with the US indexes. I was able to draw a pair of trendlines joining the major highs and lows and suggest there was one more wave in a final fifth wave up from the current wave 4 low.

So, did the market follow my roadmap in September? I believe it did, and here is the chart updated: 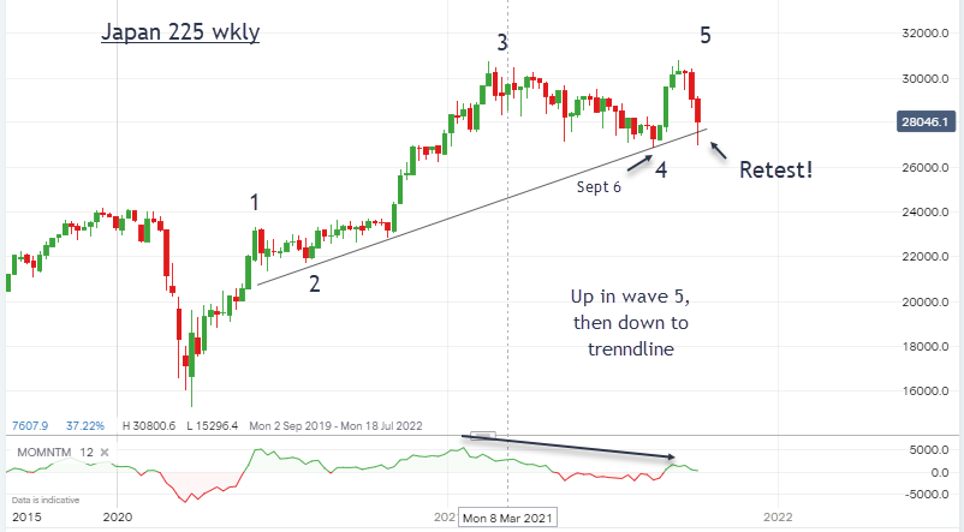 As outlined from the smaller scale charts last time, the market surged up and I was looking for a new high in wave 5. In fact, it did manage to exceed the wave 3 high but by less than 200 points before turning. And that was enough to qualify as a genuine wave 5 top. Like many technicians, I was then on the lookout for a reversal lower given the large momentum divergence at the new high.

Right on cue, the market then fell out of bed and came right back to re-test the major trendline last week and move back under our original entry.

That gave us an opportunity to exit the trade at breakeven since a bullish outlook had been fulfilled to the wave 5 high, but has now been likely cancelled by the sharp pullback.

The whole bullish scenario that had lasted since 2009 was hit on the head on 14 September, the date of the wave 5 high. That's how quickly markets can turn.

That whole exercise resulted in zero loss and tied up capital only for one month. I judge that to be a worthwhile trade. Any time you lose no money on a failed trade feels almost like a success!

Of course, because markets are never 100% predictable, it is possible the index could recover and go on to make new highs. But a hard break of the major trendline would severely lessen these odds.