We want to hear from you! The biggest retirement survey of its kind, brought to you by interactive investor, is back for a third year. 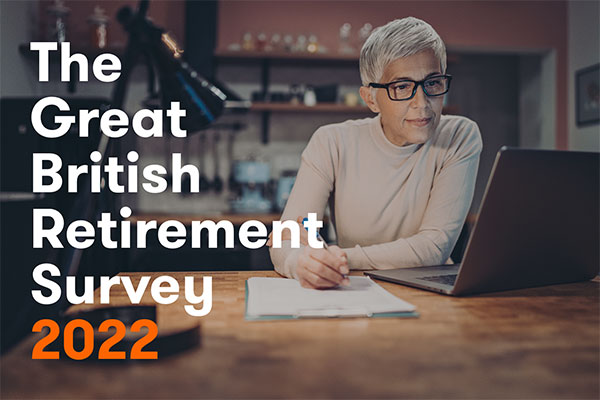 The survey, which is the largest of its kind and now in its third year, seeks the views of thousands of people of all ages, from right across the UK, on how they are feeling about retirement, how they are preparing for it or how current retirees are managing.

This year’s survey comes amid a cost of living crisis and growing concern about the insufficiency of defined contribution pensions to deliver decent retirement outcomes for millions of workers.

Commenting on the significance of this year’s Great British Retirement Survey, Becky O’Connor, Head of Pensions and Savings, interactive investor, says: “Living in interesting times has an impact on people’s financial planning for the future. It’s clear that macro, real world events have a huge influence on people’s ability to invest for the future and manage money in retirement – if retirement is still on the cards.

“This year, the survey coincides with a cost of living crisis and growing concern about the insufficiency of the new wave of defined contribution pensions – the type that most people employed by the private sector now have – to deliver decent retirement outcomes.

“Many people with pensions – both workers and retirees - are concerned about the impact that stock market volatility might have on their pot values, as well as how long their retirement income will last as prices rise, especially those who are at or approaching retirement.

“This survey is a chance to make your own experience of pension saving and retirement planning count, at whatever stage of your pension ‘journey’ you are at.”

We want younger working people to have their say, too

Becky O’Connor adds: “We do not just want to hear from those who are coming up to retirement age. This survey is designed to reflect the health of the entire population’s retirement plans, so we are urging those of a younger working age to share their valuable views, too, even if it is merely to tell us how hard it is to think about something so far in the future, especially as living costs rise.

“We really want to better understand how younger working people in the UK are approaching their pension pots; if they’re thinking about it much at all or if it has been put on the back burner until they’re older and have ticked off some other key life milestones.”

The Great British Retirement Survey (the Survey): (i) is open to all UK residents aged 18 years or over; (ii) shall close at 17:00 on 31 July 2022; and (iii) is not open to employees of Interactive Investor services Limited (IISL) or anyone professionally associated with IISL or the Survey.

By participating in the Survey, you will be given the opportunity to participate in a prize draw for: (i) 1 x £1,000 (one thousand pounds sterling); or (ii) 5 x £100 Amazon, John Lewis or M&S Vouchers. By participating in the prize draw, you consent to IISL collecting, storing and processing your personal data; (i) in order to run and administer the Survey and its prize draw; (ii) for the purposes set out in the IISL Privacy Policy, available here; and (iii) for any other purposes (e.g. marketing) which you expressly consent to from time to time.

If you do not (or no longer) consent to IISL collecting, storing and processing your personal data in accordance with the above, you must inform IISL of the same in writing via email to dataprotection@ii.co.uk or in writing at:

The winner of the prize draw will be chosen at random by a computer program, on or as soon as reasonably practicable after 31 July 2022. IISL will notify the winner by email, using the email address given during the Survey). After such notification, the winner will have 28 days to claim their prize. If IISL don’t receive any response from a winner within 28 days of the notification that they have won, IISL can choose to offer the prize to the next eligible participant chosen from the remaining valid entries. Each participant consents to IISL publicising its name and city of residence for the sole purpose of announcing the winner.

All participants agree to be bound by these Terms and Conditions and that the decision of IISL is binding. To the extent permitted by law, IISL will not be liable for any claims, losses or damages of any kind arising out of or in connection with participation in the Survey of its prize draw. IISL reserves the right to alter, withdraw or amend the prize draw offer at any time, if in IISL sole discretion, it is reasonable to do so, without financial liability. IISL shall not be liable for any loss or damage suffered from entry into the prize draw, acceptance of, delays in, or the arrangements surrounding the prize, or from any event beyond the reasonable control of IISL. In the event of any fault, mistake, misunderstanding or dispute concerning the operation of any part of the prize draw the decision of IISL shall be final.

The prize draw and these Terms and Conditions are governed by English law and the exclusive jurisdiction of the English courts.