Meet the bright young things being tipped as the next big things in fund management. 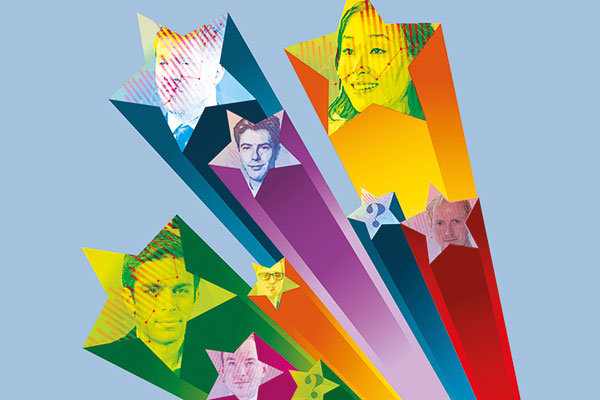 Trying to second-guess the fund managers destined for stardom is ultimately a hunch at best, as no one can predict the future. A sceptic might argue that such an exercise is as much a matter of chance as finding a needle in a haystack – but professional fund investors (those who meet and interview scores of fund managers every year) would disagree with this notion. They maintain there are certain investment attributes and personality traits that set up-and-coming fund managers apart from the crowd.

- When a fund manager moves on, should you hold or fold?

One young fund manager looking to make a name for himself is Kartik Kumar, co-manager of Artemis Alpha Trust alongside veteran fund manager John Dodd. Kumar, who joined Artemis in 2012 after graduating from university, also co-manages Artemis Strategic Assets, an open-ended multi-asset fund, alongside another experienced manager, William Littlewood. He became co-manager of the fund in April 2017, and just over a year later in April 2018 was handed more responsibility with the co-management of the investment trust.

One of the big changes to take place since Kumar came on board at Artemis Alpha Trust has been a cull of the unquoted stocks held in the portfolio (from 23% to 7%). In part, this was driven by Kumar’s desire to stick to his area of competence in listed equities, but it was also an attempt to broaden the appeal of the investment trust, which has £156 million in assets. Kumar says: “I am more confident in delivering outperformance with listed equities. The unquoted element of the portfolio was an issue that needed addressing in order to improve performance.”

Indeed, on both a five- and 10-year view performance has been lacklustre. On a five-year view (to the end of February) figures from FE Analytics show the trust has produced a share price total return of 15% versus 30% for its sector, IT UK all companies. Relative performance is even bleaker over 10 years, with a return of 40% against the sector average of 125%.

But various experts, including Shore Financial Planning’s Ben Yearsley and Charles Macdonald of Rossie House Investment Management, believe the trust has become a more appealing proposition since Kumar become involved. In the Money Observer January Wealth Creation Guide, Macdonald named the trust as a wildcard pick for 2020. He said: “The portfolio has become more compact since Kumar came on board, with much more exposure to large and mid-caps, while the exposure to unquoted shares has been greatly reduced. It is a good UK specialist opportunity.”

The more concentrated focus is evidenced by the number of holdings declining from 100 to 40, the hope being that this will in turn turbocharge returns and reduce the stubbornly wide discount, which has been in excess of 10% for the past six years. These are still early days, but so far so good. Over the past year to end February, the trust’s share price total return stands at 5.9% versus 2.7% for the sector. This has been driven by a notable improvement in net asset value performance over 2019, with returns of 28.1% against 23.6% for the sector average.

Kumar’s investment philosophy boils down to three main ingredients: analysing how sustainable the core business of a company is, buying at an attractive price and assessing whether the management adds value. “I also like to run my winners, as I think the greatest mistake made by investors is selling too early,” he adds.

In order to gain an edge on other investors, and indeed tracker funds, Kumar also resorts to less familiar methods. For instance, he went to Parliament to listen to Mike Ashley explain how he would save the struggling retail sector. Sports Direct, which Ashley founded, is Artemis Alpha Trust’s top holding, an 8.3% position. “One of the reasons I like the stock is because of its management, and I think the negative perception is misplaced,” he adds.

Another more off-beat way Kumar has assessed a stock was to plot all of the Domino’s Pizza outlets on Google maps. “Our analysis found that a quarter of the shops occupied by Domino’s Pizza have no competition at all due to their location, which we think puts the firm in a strong position,” he explains.

Kumar is joined by several others who are also being tipped as the next big things in fund management. FundCalibre, the fund ratings agency, picks out three ‘millennial’ fund managers whom it rates highly: James Sym (manager of Schroder European Alpha Income), Matthew Page (co-manager of Guinness Global Equity Income) and Will Argent (fund adviser of VT Gravis UK Infrastructure Income).

Both Sym and Page were handed plenty of responsibility in the early stages of their respective careers. Sym has managed Schroder European Alpha Income since launch in May 2012. The fund made a flying start, outperforming peers for the first four years, but over the past couple of years performance has dipped significantly. This, however, has not knocked FundCalibre’s confidence in Sym’s stockpicking abilities.

Page has been a co-manager for just over a decade. Performance has been solid and more consistent, with Guinness Global Equity Income comfortably outpacing the IA global equity income sector average across 10, five and three-year timeframes.

Meanwhile, Argent has been fund adviser of VT Gravis UK Infrastructure Income since July 2017. FundCalibre notes he has over a decade of investment experience under his belt.

Daniel Pereira, investment research analyst at Square Mile, notes that Barrat “has come a long way” since he joined the firm in October 2013. Pereira says: “We think that he has developed into an outstanding manager under the guidance of co-manager Henry Dixon, whom we also hold in high regard. Man GLG has clearly recognised his talents, and has supported the launch of the Man GLG UK Absolute Value fund (in June 2017), which is solely managed by Barrat.”

In a similar ilk, Pereira notes Elliott has benefited from learning the ropes from more experienced colleagues. He adds: “We think his analytical skills have provided him with a firm foundation for his portfolio management role alongside the more experienced Ben Peters.”

See has been part of Baillie Gifford’s Japanese equity team since 2012 and was appointed co-manager of Baillie Gifford Japanese Income Growth at the start of 2017. This was just six months after the fund was launched. She works alongside Matthew Brett. Pereira adds: “See has an innate knowledge of the companies within the fund, its universe and of the Japanese backdrop more broadly. We believe her to be highly competent and extremely intelligent.”

The reality is that there’s no such thing as the Midas touch. Even the most highly regarded fund manager names go through rough patches and cannot deliver outperformance over every single timeframe. Instead, the key to separating fund manager skill from short-term luck is to look out for “consistency of style and approach”, notes Liontrust’s head of multi-asset, John Husselbee. He adds that if the fund manager  starts to invest differently, then alarm bells should start ringing.

Husselbee highlights this as one of the factors that led to Neil Woodford’s spectacular fall from grace: he “changed his spots,” as LF Woodford Equity Income was notably different from the funds he had managed at Invesco. “That’s what we’re looking for, to make sure our fund managers don’t change their spots.”

Another development that leads to fund manager skill being “diluted”, according to Husselbee, is when a fund becomes bigger in terms of assets under management. “When a fund has a successful launch and raises a good amount of money, this acts as a tailwind as all the money is being put into the market, but it turns into a headwind when funds become too big.”

Larger funds are more constrained, particularly in relation to smaller companies, because they need to own a significant portion of a small business for it to be a meaningful position in the portfolio.