Our charts expert looks at how oil firm Petrofac is shaping up as energy prices rise. 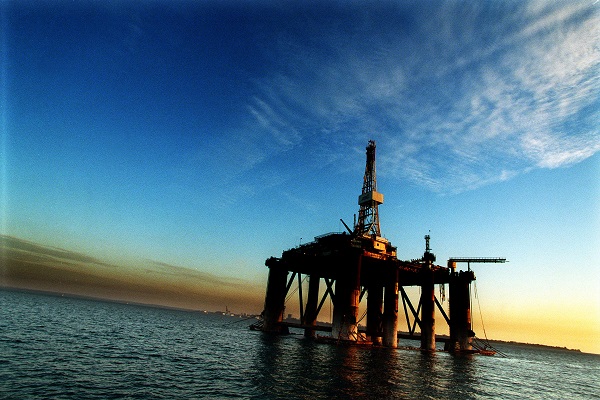 This large international oil and gas services company has been embroiled in a long-running bribery scandal for the procurement of Middle Eastern contracts.

With the dead weight of that overhanging its shares – and the ongoing policy of governments to bear down on the fossil fuel industry in favour of 'renewables' - is it any wonder the share price has suffered greatly?

So why am I taking a hard look at Petrofac Ltd (LSE:PFC) as a candidate for my Buy Low/Sell High list?

First off, the shares have sunk from a high of £18 in 2012 to a 90p low set in May this year – a decline of 95% in nine years. Anyone investing since 2012 has seen nothing but losses and as a result, buying interest has fallen off a cliff.

And that is a great backdrop for a potentially massive short squeeze! And last week, it was announced the company has at last reached a settlement of the bribery case with the Serious Fraud Office – and one of the weights is now being lifted.

That news boosted the shares by 25% in one day and was a confirmation that short sellers were starting to cover.

But secondly, the real kicker here is in the form of the booming energy markets.

With little electricity generation recently in Europe from wind (which failed to blow), natural gas (and coal!) has been called on to plug the gap, so exposing the fragile nature of the current headlong political rush into 'renewables' and away from fossil fuels and nuclear.

That extra demand for gas is showing up in the price action. Here is the Natural Gas chart showing the stunning increase of 360% in 14 months. 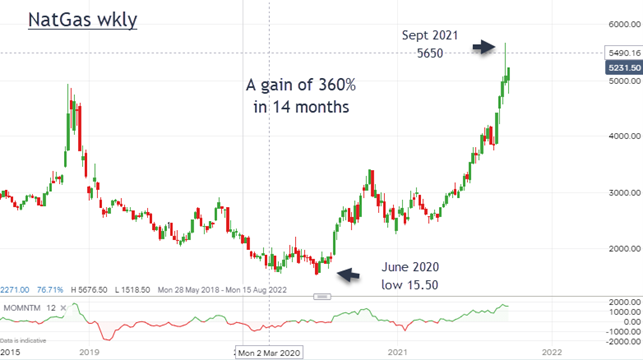 And crude oil is following a similar path. So, with rising demand along with rising prices, will there be a move to exploit these high prices by oil and gas companies increasing their exploration and development budgets? That would be the normal economic path and would be a no-brainer if many Western governments were not so committed to killing off the industry.

But non-Western oil and gas companies do not feel so constrained and would likely be planning now to call in companies such as Petrofac.

The high prices are sending the usual economic message that the world needs more Natural Gas, not less.

Naturally, this is in direct opposition to the Net Zero goals of Western governments. Pretty soon, something will have to give politically and it is usually the markets that win that battle. Can any government survive a replay of the 1970s Winter of Discontent?

And with the shadow of the bribery scandal lifting (with exquisite timing, please note!), Petrofac can now bid openly for work.

Two weeks ago, I highlighted the building pressure to promote nuclear energy to secure baseload generating capacity and today, it has been announced that the UK will order Rolls-Royce Holdings (LSE:RR.) reactors (now alarmingly dubbed 'mini nukes'), thus bowing to the inevitable. I remain bullish on the shares.

But that will not solve the short and medium-term energy problems – and reliance on natural gas will be required for the foreseeable future.

So, is it possible some North Sea fields will be re-opened?  And is it possible fracking on the mainland will now be permitted?  Or will a word in Mr Putin's ear get more gas to flow from Russia?  Hah!

If so, then last week's surge above the major trendline (barely visible on the monthly chart) could start a major rally phase with my first target at the £7 region. 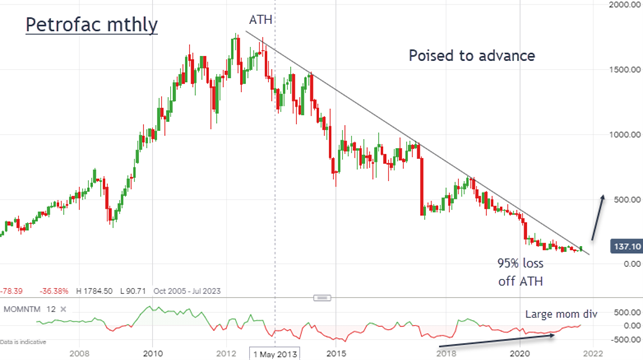