Self-storage firm Lok'nStore has followed up better-than-expected full-year results with news of "brisk" trade in the six months to January. We said in October that a share price of 215p was an undeserved discount to forecast net asset value (NAV) and made "no sense". Since then, however, they have shot up 16% to 251p. But business is going so well, the house broker reckons there's an increasing likelihood of upside to its forecasts.

Revenue jumped by 16% year-on-year in the first half, self-storage unit occupancy was up 5.5% and price per let square foot increased 6.7%, way above consumer price inflation which sank to a 15-year low in December at 0.5%.

A new store opened in Reading last October and £2.9 million was received from the sale of the old store. Trading both there and in Maidenhead bodes well for other new stores in Aldershot - due to open in April or May - Southampton and Bristol opening over the coming eighteen months. 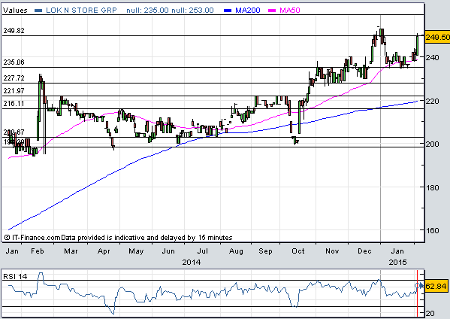 "Strong growth of the existing business, good asset management and Lok'nStore's conservative debt ratios means that this major expansion can be financed out of cash flow and our existing bank facility, and this will enable us to continue to deliver enhanced returns for our shareholders," said boss Andrew Jacobs.

Of course, comparatives get tougher in the second half. However, finnCap has pencilled in sales growth of 7.5% to £14.9 million, and now thinks there’s a good chance Lok'nStore will beat forecasts. The broker currently expects adjusted pre-tax profit of £2.2 million in 2015, up from £2 million in the year to July 2014, giving adjusted EPS of 6.9p, rising to 10p the year after.

Look out for confirmation of the numbers on 27 April.