Our columnist thinks wins beat losses – and the outlook is good. 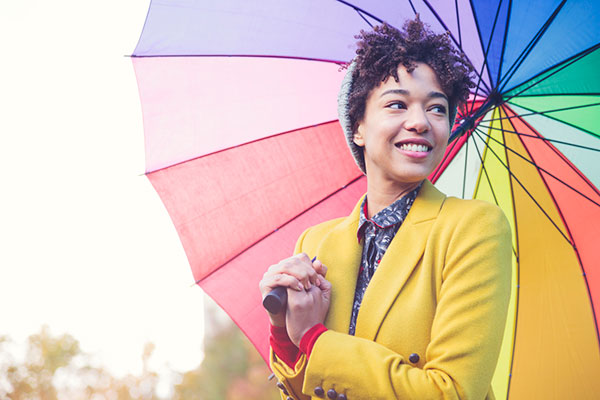 Earlier this week, power converter manufacturer XP Power (LSE:XPP) updated investors about its performance in the first quarter, January to March 2021. The update, and the results for the preceding full year to December 2020, confirmed once again the company prospers through downturns.

Power converters regulate the voltage supplied to machines, either to power electronics or industrial processes like the production of plasma to weld plastics. XP Power manufactures in the Far East and supplies converters through a network of direct sales offices, chiefly in the US, but also in Europe and Asia.

It sells power converters to manufacturers of equipment used by industry, semiconductor manufacturing and hospitals.

Comparisons with 2019 are complicated by Covid-19 because XP Power shut down its Chinese factory in the early stages of the pandemic and demand from industrial customers slumped, but orders for power converters incorporated in healthcare equipment surged and the semiconductor marked recovered from a downturn in 2018. 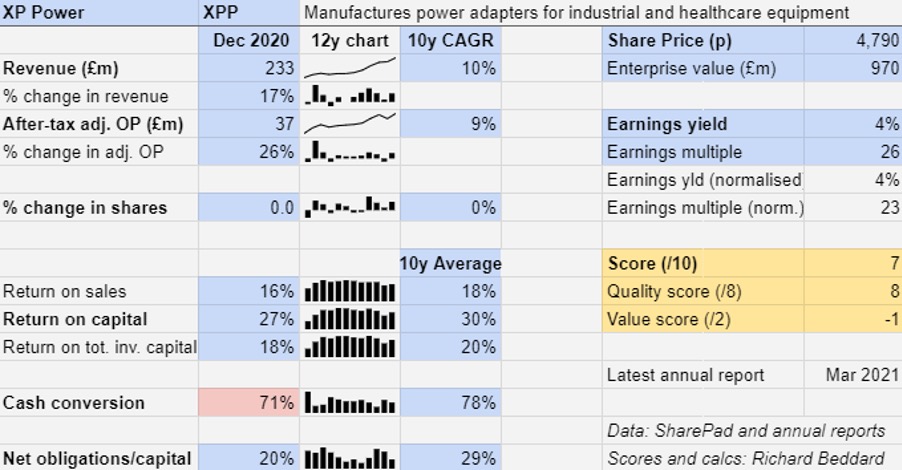 The outlook is good. Revenue in the first quarter of 2021 was well ahead of the prior year and the company has a strong order book even though demand from healthcare equipment manufacturers has subsided.

Semiconductor equipment manufacturers are booming and industrial customers are recovering.

One of a kind, example to many

XP Power is one of my favourite businesses, partly because it explains itself so well in its annual report and on its website. This is important because it is headquartered in Singapore, which makes the AGM a long haul. What it says is impressive, too.

The company’s greatest strength is its capacity for change, an opportunity afforded by the increasing sophistication of machines.

Modern machines often incorporate many power converters, each supplying different voltages. The machines must be able to communicate with the converter, for example in the event of an error, and they must operate at high levels of efficiency, for cost and environmental reasons. Reliability is critical in hospitals and factories, where equipment failure can interrupt an operation or halt a production line.

Once designed into a machine, power converters remain specified for the lifetime of the machine, giving XP Power revenue for years to come. While demand fluctuates with demand for the machines, the end markets have their own rhythms.

Except for during pandemics, healthcare experiences the steadiest demand. Industrial markets are more capricious. Downturns, though, have been one of XP Power’s enablers. Although profits dip occasionally, it has always remained profitable enough to maintain investment and emerge stronger.

Originally a distributor of power converters, XP Power built perhaps the world’s largest field sales force. The salespeople realised the increasingly sophisticated needs of its customers, so the company developed the capacity to design power converters early in the noughties.

It chose to design families of products that could be easily modified, rather than going back to the drawing board for each new customer requirement. Since customers are often rushing to finalise their design, being quick to supply a prototype is a competitive advantage.

Then the company realised it could gain greater control of quality and manufacturing efficiency if it manufactured the power converters itself, so it opened factories, first in China in 2009 and then two in Vietnam.

The latest phase of its evolution has been the acquisition of other manufacturers with the capability to manufacture high power converters, filling-out its product range and enabling it to supply more of the converters in its customers’ machines.

Now the company is focusing manufacturing resources on more complex and profitable high-power converters and high efficiency “Green Power” products. It is reverting to third party manufacturers for many of its established lower power product families.

At each stage of its evolution XP Power has added more value for its customers and has grown profitably. For example, XP Green Power converters are 95% efficient, producing five times less waste energy than competitor suppliers.

The company says Green Power usually repays the additional cost of the converter within the first year of use, and Green Power converters last longer because they run cooler.

At the head XP Power throughout most of the journey have been James Peters, its founder, a substantial shareholder and the company’s chairman, and chief executive Duncan Penny.

The day you read this may be Penny’s last day working for XP Power as he bows out on 20 April at the AGM. He is replaced by former chief financial officer Gavin Griggs, who has worked with Penny for the last three years.

The company has mastered change so completely, I have high hopes this change in management will be as seamless as XP Power’s adjustment to its strategy.

Peters anticipates evolution rather than revolution, and that is good enough for me.

What could stop it growing profitably? [2]
+    Resistant to market downturns
?    Low-cost competition for low power/complexity converters
?    Trade frictions between China and the US

How does its strategy address the risks? [2]
+    Focusing resource on complex power converters and biggest customers
+    Transferring high power products from US to low-cost Vietnam
?    Moving products from Chinese facility to Vietnam to avoid tariffs

Will we all benefit? [2]
+    Founder and chairman owns 6% of the company
+    Employee-focused: reports engagement and turnover
+    Explains itself very well

Despite the pricy shares, I believe XP Power is a good long-term investment.