A decline in share price at this blue-chip income play “looks irrational”, argues companies analyst Edmond Jackson. Here’s why he thinks there’s an opportunity to lock in a 7% yield.

Was a 30% re-rating of British American Tobacco (LSE:BATS) a fleeting phenomenon, or should you exploit an 11% drop from mid-June’s high, to seize a circa 7.5% yield?

Last November, I drew attention to BAT and Imperial Brands (LSE:IMB) at £28 and just over £16 respectively, rating both a ‘buy’ - significantly because 2022 could see an aspect of portfolio rotation from growth to value, as expectations shift towards rising interest rates.

This broadly worked well, as BAT traded above £36 by end-June, with Imperial up 19% to £19 in mid-July. Substantive dividends are also involved - currently 54.5p from BAT each quarter and 21.3p from Imperial.

But while Imperial has consistently offered a slightly higher yield – now 8% at £18 a share assuming consensus forecasts, versus 7.5% for BAT - some disparity is fair given BAT is better-established in new smoking products that represent the future. Otherwise, the tobacco market is broadly flat.

While Imperial has remained in a sideways consolidation since May, BAT’s drop to £32 since its 27 July interim results takes it below a chart range since April.

Read about how to: Open a Trading Account | How to start Trading Stocks | Top UK shares

A hit from Russia exit, not higher operating costs

I am quite surprised the stock has taken a double-digit percentage hit, as if signalling a wider bear market where sentiment is now twitchy as to reported figures – rather than discerning the ongoing situation.

BAT has fallen to over £5 billion in market value, but if you examine its income statement, like-for-like raw material costs are actually down from 18% to 17.5% of interim revenue. Likewise, employee benefit costs, down from 11.2% to 10.3%.

The hit is shown in the “adjusting items” section of the interim accounts, where restructuring costs are up four-fold to £333 million, and exiting Russia is quantified at a £958 million impairment charge, up from a £71 million such charge last year. Litigation-related items totalling £530 million (relating to an historic breach of sanctions) added to dirty washing.

Including amortisation, all of this was just shy of £2 billion, explaining the hike in “other operating expenses” to over £5 billion from £3.4 billion last time.

Otherwise, the operational narrative and outlook statement is pretty bullish, reflecting BAT’s transformation towards new vaping products, whose revenue rose 45% to £1.3 billion, or 10% of group total. Despite flat cigarette volumes, overall revenue rose nearly 6% to £12.9 billion – good progress considering global tobacco industry volumes are expected to be down around 3% this year.

Effectively abandoning the Russian operation, by transfer, had been flagged initially on 11 March and re-iterated in a 9 June pre-close update.

As part of a “Quantum” programme – creating a more efficient, agile and focused company – a targeted £1 billion annualised savings achieved over the last three years has now been upgraded to at least £1.5 billion.

While the hit from Russia and litigation is disappointing, ongoing cost savings are more relevant, and also timely. BAT has made its own luck with this initiative culminating just when inflation has taken off and many other companies face a cost battle.

Set to benefit from a strong US dollar tailwind

While the US currency’s surge to its highest level in 20 years is crimping profits for US companies with global operations, BAT derives 46% of its revenue and 76% of its profit from the US. 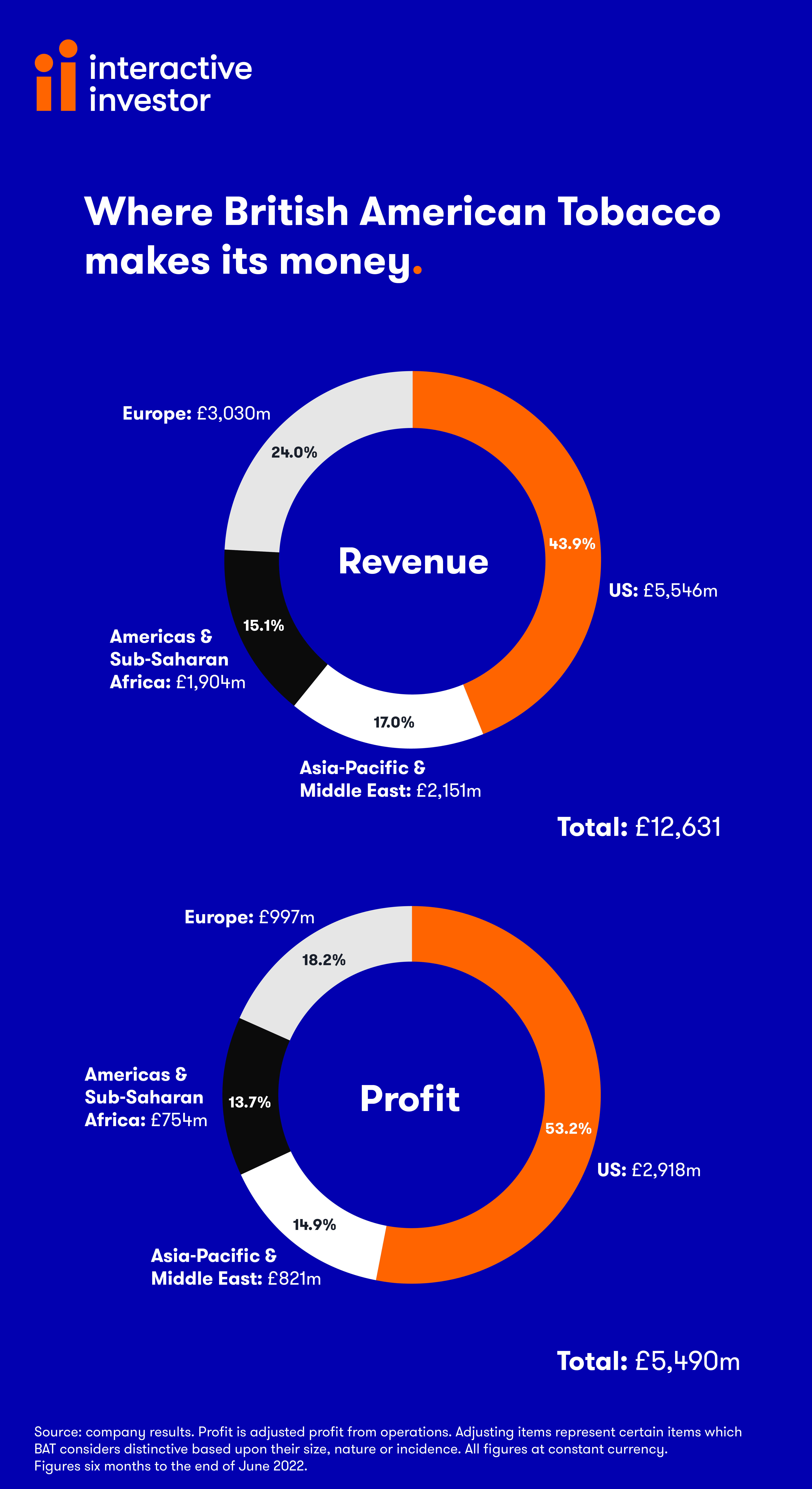 Again, I am puzzled why the market has chosen to react so negatively to £2 billion of exceptional costs when US dollar strengthening is far more significant to investment value on an ongoing basis.

Dollar strength is a function of the Federal Reserve being suddenly intent on achieving a 2% inflation objective, hence lifting interest rates far above central banks in Europe and Japan.

Considering a long-term chart for the US dollar index, it is interesting to see how the most dramatic spike was in the 1980’s – the last major battle against inflation – but I doubt interest rates will achieve the 17% average in 1981 given humungous debt nowadays.

While it is impossible to say for how long this may last, a stubborn stagflation scenario could see relatively higher US rates persisting for years. It quite appears to depend if a tough recession follows, which brings down inflation by damping demand.

Stripping out various exceptional costs, BAT has enjoyed 6% growth in constant currency interim earnings per share (EPS), hence a positive currency tailwind from the US dollar should position it well for the medium term.

BAT’s free cashflow targets are before dividends, putting the company in a strong position to return excess capital via dividends also buybacks.

The interim results show conversion of operating profit to cash flow at over 90%, and there is a commitment to a long-term 65% dividend pay-out ratio.

The CEO speaks of being “well-positioned to navigate the current turbulent environment due to our powerful brands, operational agility and continued strong cash generation”.

You could say all such enticing words I major on for this piece are reflected in the consensus expectation for a 20% re-rating in net profit this year to near £8.2 billion, rising to £8.8 billion in 2023.

Projected EPS growth lags this, which is curious amid a buyback programme. However, double-digit percent earnings growth compares with a high single-digit price/earnings (PE) multiple – meaning BAT even qualifies for a sub-1.0 PEG ratio (projected earnings growth divided by the PE) which is normally a growth stock benchmark.

Moreover, the financial summary table shows free cashflow per share ahead of EPS since 2018, which is what counts for dividends.

Non-executive director buys £122,623 worth of equity

Presumably, he focuses on key fundamentals I summarise here: of new product progress, underlying momentum helped by lower operating costs, strength of the US dollar for BAT’s key global market, and also not fretting over the cost of exiting Russia, plus other exceptional, as the market has appeared to.

Moreover, the global population is expected to grow until at least the mid to late 21st century, hence vaping products should continue to gain adoption by new generations. Decide your own investment ethics but, objectively, smoking products look to have a sound future.

What can go wrong? Broadly: in the short term, discretionary consumer spending hurt by a global recession, even on addictive items; and longer-term, by regulation and personal healthcare concerns proving keener than expected.

I do not wish to make BAT sound a wonder stock, just emphasise its credentials for current tough times. I concluded on 11 March: “BAT is not an ethical investment, but it merits priority attention – especially if the market drops.” This current fall looks irrational in light of the company’s progress. Buy.

Bond Watch: Bank of England’s dire inflation forecast may be too optimistic