Oil prices have rocketed since the pandemic crash, but the current holding pattern could end with a rapid decline, warns independent analyst Alistair Strang. 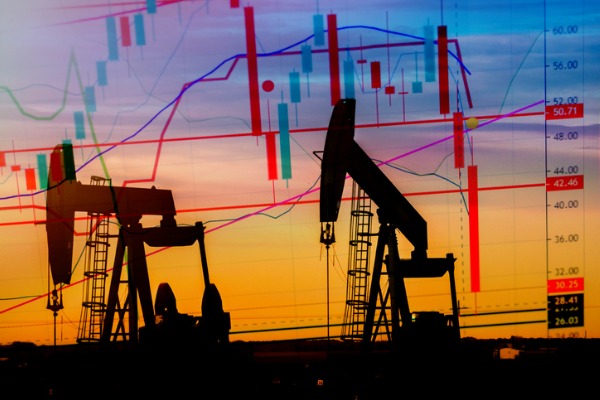 When a share or commodity appears to get out of control, it’s usually worth taking several steps back and reviewing the Big Picture. Often, it can be stunning how quickly “confused” becomes “understood”.

For Brent crude, we’ve presented a 15-year chart below and, as can be immediately seen, the visual results are utterly useless!

About the only sane result comes from the fact the recent high in the $130’s rather neatly matched the plateau from 2009 through to 2013, suggesting some sort of glass ceiling exists, a natural high the commodity is experiencing difficulty exceeding.

The situation currently is pretty straightforward. Our calculations suggest above $130 should make an attempt at $152 next. If triggered, apparently such a movement shouldn’t even need a clever stop loss as the chart to this hypothetical $152 should prove relentless. 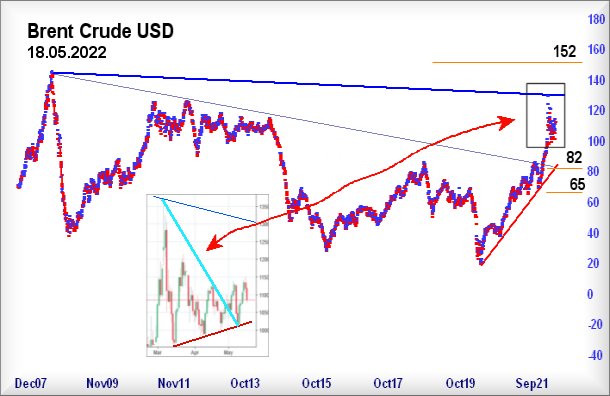 However, the Big Picture is utterly failing in its duty to provide an overall clue as to direction. Unfortunately, about the only path to sanity comes from the inset on the chart, Brent movements during the last three months.

If we take a deep breath and choose to break down what’s been happening;

Brent peaked in early March, almost reaching $140 (briefly) but failed to close the session above $128. Subsequent rises have failed to trouble this initial high, instead describing a pattern of “lower highs” until this weeks surprise visit to $115.

Equally, when we review the pattern of ‘lows’, instead of constant ‘lower lows’, we see the lows getting very slightly higher. This behaviour goes against conventional wisdom where we’d expect to see confidence weakening. Instead, there’s an insidious suggestion of strength building.

Finding ourselves in a situation where the Highs are not getting Higher and the Lows are not getting Lower, about the only safe conclusion we can draw is one where it appears the market itself doesn’t have a clue what to do, instead choosing to maintain Brent crude in some sort of holding pattern.

Quite absurdly, we’re supposed to believe this is all the fault of Russia/Ukraine while ignoring  the reality of Brent moving from the $20 level to $98 before the war started. It was ‘simply’ the case of demand growing for oil due to the pandemic easing, and the critical balance between supply, storage, and demand getting out of kilter for a while. As a result, it appears any perceived resolution of the Ukraine conflict can be expected to provoke some sharp reversals in the price of crude.

For Brent, we’re inclined to regard $101 as a trigger level as movement currently below such a level should prove capable of sharp reversal to an initial $82. Should such a level break, our secondary works out at $65 and a very possible bounce level, when the product matches its pre-pandemic price.

For now, like the wider market, we’re not seeing any comfortable clues as to direction but, if we take an “if it were a share” stance, we’d tend to anticipate $82 making a surprise appearance sometime soon.