The West is refocusing its attention on strengthening its defences, and one major player in particular is set to feel the longer-term benefits, as our companies analyst explains. 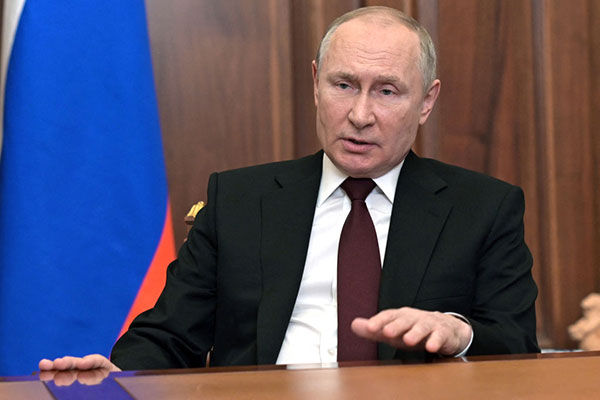 Demonstrating how difficult it is becoming to pick UK domestic stocks, the British Chamber of Commerce (BCC) has said it now expects an 8% inflation rate to cut disposable incomes in 2022 and put a brake on recovery from the pandemic.

But we have yet to feel the effects of sanctions on Russia – besides ongoing supply disruption plus higher costs following Covid – and also the impact of any potential payback, such as the cutting off of gas.

Such acute uncertainty means even so-called ‘defensive’ stocks such as BT (LSE:BT.A) and Vodafone (LSE:VOD) have been coshed. It is a first reason why a circa 20% re-rating of defence stocks is genuine in all respects. So long as you are comfortable with backing the arms trade, better prospects appear to be underwritten.

Even if invasion of Ukraine pauses for some kind of settlement, the West is not going to trust President Putin. European leaders are declaring a commitment to greater defence spending, and President Biden is strongly supportive of Nato. Moreover, this sea-change in Europe may tilt the US towards greater defence commitment in Asia Pacific, its first security priority.

On a macro political and economic view, order books for defence companies look set to be bolstered – possibly on a five- to 10-year view. The rise in defence stocks could have a long way to run.

As Russian military action worsened, 27 February saw the German chancellor declare a €100 billion (£83 billion) fund to deliver a sustained increase in defence spending over the coming years. It is targeted to rise from about 1.5% to 2.0% of GDP, with Germany under pressure to meet Nato collective responsibility.

The market was therefore rational to re-rate BAE Systems (LSE:BA.) from around 600p just before the invasion of Ukraine to near 750p; it currently trades at 735p. When declaring its 2021 results on 24 February, the same day as Russian tanks rolled into Ukraine, the message was only of slight growth: revenue up 5% with around 3% guided for 2022. Operating profit was guided at around 5% and earnings per share (EPS) at 4%, according to exchange rate movements.

It is a strong base, even before defence spending rises. Free cash flow was guided at over £1 billion for 2022 and over £4 billion to 2024. Institutional investors will take notice also of the fact that the prospective yield (based on recent forecasts rather than added potential) is a still material 3.6% and relatively secure.

This is Britain’s largest defence company, projected to achieve around £1.6 billion of net profit this year on £22 billion revenue, with a 12-month forward price/earnings (PE) multiple of 14.5x. That would appear to price in some additional growth, but bear in mind the prospect of a long-term sustained increase in order books plus the general element of growth stock scarcity.

But with a spread of activities across electronic warfare systems, military platforms and services, aircraft, maritime and cyber & intelligence, BAE will be the prime stock in investors’ minds when they consider exposure to defence spending.

The preliminary results show a good balance of revenue across the activities, though there is no geographic breakdown; possibly this will be available in the annual report, although BAE is a true international business operating in over 40 countries.

There is Chemring (LSE:CHG) with over £400 million of annual revenue projected, though it is focused on defence countermeasures. A relatively tight market has seen its stock jump 28% to 330p, compared with BAE up 23%. Higher defence spending will likely help Chemring; but a relative lack of liquidity may put professionals off, despite initially accentuating the re-rating.

Babcock International (LSE:BAB) remains the sector’s ugly duckling, its stock initially up 13% in response to Ukraine, but losing much of that to around 320p currently. Despite consensus for a recovery from losses and a £160 million net profit on £4.2 billion revenue in the current year to 31 March, the last update on 25 February re-iterated “significantly negative” free cash flow amid additional pension contributions, restructuring costs, facilities investment and IT upgrades. Babcock is one for turnaround investors to follow.

BAE’s forward PE of around 14.5x compares with near 18x for Chemring and 8.5x for Babcock.

It has a strong record of dividend payouts, even in the last two years of Covid disrupting most other industries. A prospective yield around 3.6% compares well with Chemring on sub-2% - though it too has a strong record – while Babcock slashed the dividend during the March 2020 financial year, then omitted it in 2021.

Earnings cover for BAE’s payout is projected to remain at around 2x; and if anything near 62p a share of free cash flow is maintained after last year, cash flow cover would be more like 2.4x.

Such statistics will put BAE on fund managers’ radars, even before they consider its increasingly attractive prospects.

BAE is expected to grow earnings per share by just over 10% this year, easing to 6.5% in 2023, as if it was pretty fairly valued at around 600p and the re-rating acknowledges higher profits ahead.

This morning, the stock is down around 1% to 735p – as if to indicate that yes, it can retreat.

A scenario exists where the Russian army fails in the sheer logistical challenge to take over Ukraine, its equipment already reportedly mired and air capability nowhere near as strong as predicted.

Yet Russia’s invasion also brutally overturns complacency about “the end of history” with serious European war left behind in 1945. The only near-term hope for Putin being replaced is a major health setback, any change from within likely to take years to accomplish.

While media focuses on the Ukrainian capital and human suffering, Russia has a grip on valuable south east Ukraine with its ports and oil facilities. A corridor has been established from Russia to Crimea, offering strategic gain. If Putin were to settle for this, it would reward his military adventure.

A more conservative, realistic view – that this conflict will drag on – is shown by last week’s brief drop in BAE from a 746p high on 2 March to around 690p on 4 March, which triggered fresh buying.

‘Risk-off’ generally is the best hope for a drop

The hope is now for lower consumer demand to temper the need for interest rate rises from central banks, although we are already looking at 8% inflation, so it’s hard to see quite what a circa 2% rise in central bank rates would achieve.

The prospect may not be as bad as 1973, when oil prices quadrupled, but it’s hard to envisage the world avoiding a stagflation type scenario that would be liable to temper equity ratings.

No-one can predict such developments reliably, though.

All things considered, the tactical approach is to average into BAE with a view steadily to build a position to hold for five years and longer. Buy.