Our City analyst assesses the web of complex pressures on big companies in 2022, and considers why the UK’s businesses have apparently got off relatively lightly. 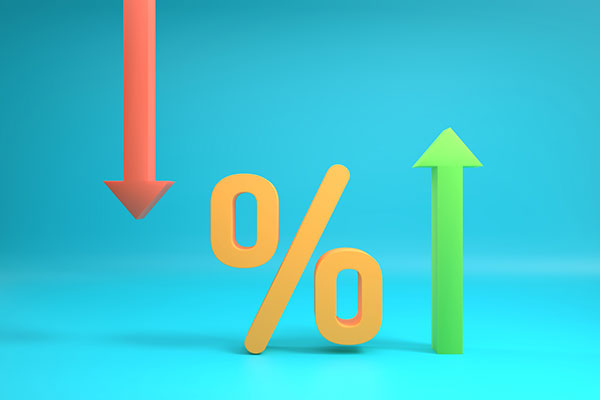 A closer look at the outperformance of UK equities in a dramatic first quarter of the year reveals almost a fifth of FTSE 100-listed stocks posted double-digit percentage gains.

Commodities-focused Glencore (LSE:GLEN) and Anglo American (LSE:AAL) led the way after surging by more than 30%, while HSBC (LSE:HSBA), AstraZeneca (LSE:AZN) and Vodafone (LSE:VOD) were among other stocks to do well.

On the other side of the ledger, the war in Ukraine and potential impact of soaring inflation on consumer confidence meant almost a quarter of FTSE 100 stocks were 20% or more cheaper.

Coca-Cola HBC (LSE:CCH), which has bottling plants in Ukraine and Russia, slumped the most in the three-month period, with its 37% share price fall ahead of Royal Mail (LSE:RMG) and JD Sports Fashion (LSE:JD.).

Barratt Developments (LSE:BDEV), ITV (LSE:ITV) and Next (LSE:NXT) also declined by at least a quarter; but these hefty losses failed to prevent the FTSE 100 index from finishing the period more than 2% higher.

In contrast, the S&P 500 and Europe’s Stoxx 600 were down 5% and 6% respectively, ending a run of seven positive quarters where they hit record highs in the wake of the pandemic.

By early March, both indices were in correction territory as Brent crude hit an intraday peak just short of $140 a barrel due to Russia’s position as a significant oil exporter.

America’s plans for a major release from its Strategic Petroleum Reserve meant oil closed the quarter at $108 a barrel, still 38.7% higher over the period but going some way to drive a partial recovery in stock market confidence in recent weeks.

The turnaround also reflects the ‘Tina effect’, as investors continue to realise that There Is No Alternative to equities at a time of low interest rates.

Deutsche Bank equity strategists point out that the performances have been typical for periods of heightened geopolitical risk, where equities tend to decline by around 6-8% over a three-week period before a full retracement in another three weeks.

The UK’s rare bout of outperformance reflected the FTSE’s defensive leaning towards energy, commodities and financials. UBS points out that London’s best-performing sectors in the quarter were materials and energy, which returned 27% and 26% respectively.

As well as oil prices, supply fears caused by the Ukraine war and Russian sanctions drove up the prices of everything from aluminium to thermal coal. This played to the strengths of Glencore and Anglo American, while shares in copper miner Antofagasta (LSE:ANTO) and iron ore-focused Rio Tinto (LSE:RIO) also rose 25%.

For agricultural commodities, Deutsche Bank notes that the 30% jump in wheat futures was the biggest quarterly advance in over a decade, reflecting the fact that Russia and Ukraine make up around a quarter of globally traded wheat.

Such price pressures have had a major bearing on share performances in the consumer staples sector, which declined 3% in the quarter, and also in the domestic-focused FTSE 250 index.

The potential blow to consumer spending contributed to London's second-tier benchmark declining by almost 10% and the AIM 100 by 16%, reversing their outperformances in 2021.

The spike in inflation added to pressure on central banks, as they have been forced to pursue a much more aggressive interest rate cycle than was expected at the start of 2022.

With US inflation at a 40-year high of 7.9% in February, the Federal Reserve increased its policy rate for the first time since the pandemic in March and policymakers have indicated six further quarter point rises over the rest of 2022.

These interest rate expectations weighed on high-growth technology stocks during the quarter, with Scottish Mortgage (LSE:SMT), Ocado (LSE:OCDO) and Rightmove (LSE:RMV) among London stocks falling by more than 20% in the quarter.

In contrast, healthcare outperformed thanks to a combination of defensive properties, high exposure to a stronger dollar and some company-specific news flow. AstraZeneca shares, for example, finished the period 17% higher.

The financial sector achieved a more middling 3% return in the quarter, after an initial outperformance due to higher interest rate expectations was overshadowed by economic growth downgrades resulting from higher commodity prices.

Looking across the quarter, UBS strategist Caroline Simmons says the overall outperformance of the UK equity market was a reminder that global diversification is an important way to manage risks and volatility.

She adds: “Looking forward, we have a neutral allocation on equities versus fixed income, given the volatility and risks still present, but in light of the strong global growth backdrop, we forecast around 5% upside to equities from here, depending on the region.”