Chancellor Rishi Sunak doesn’t just have his eyes on cash-rich oil companies. Big profits made elsewhere in the energy sector are being considered fair game for the Treasury. 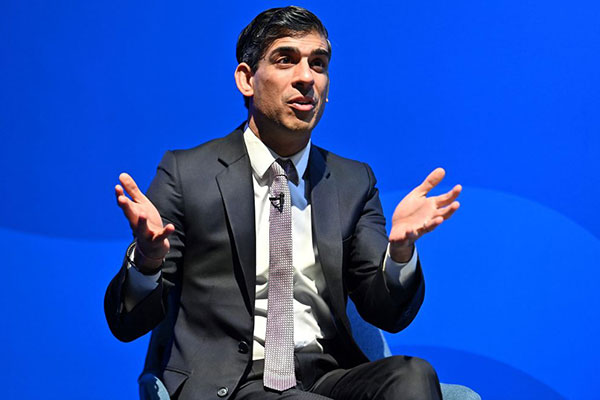 An announcement from the Treasury could come as soon as Thursday after the Financial Times reported that chancellor Rishi Sunak is looking at targeting £10 billion of excess profits made by power generators following this year’s surge in wholesale prices.

The speculation about a much broader windfall tax came on the day that the head of industry regulator Ofgem told MPs he expected the price cap on energy bills to rise in October by a further £800 to as much as £2,800.

With the public finances under strain from rising inflation, Sunak is looking at alternative ways to raise billions of pounds towards helping those households struggling to keep up.

However, the prospect of a one-off tax to be levied on North Sea oil producers and the power generators will raise concerns that funds end up being diverted away from investment in the net-zero transition, or towards safeguarding energy supplies.

Investors were alarmed by the windfall tax possibility, particularly as many will have assumed that companies focused on the renewables sector would not be touched.

SSE, which is building the world’s largest offshore wind farm at Dogger Bank alongside joint venture partners Equinor and Eni, traded as much as 11% lower at 1,702p.

However, this level compares with 1,525p prior to the start of the Ukraine war and is only marginally below the price seen as recently as a fortnight ago.

According to The Times, major SSE shareholder Royal London Asset Management has spoken out against the prospect of a windfall tax. It described additional taxes on businesses directly investing in renewable generation as “contradictory” to the UK’s desire for greater energy independence and a greener power system.

Shares in British Gas owner Centrica suffered a similar fate to SSE, falling as much as 13% to 77.35p. That only partly offsets the rise of a fifth seen in the two weeks since Centrica forecast that earnings per share will be near the top of the range of recent analyst expectations.

It reported strong volumes from nuclear and gas production assets and said that its energy marketing and trading business had secured increased volumes of gas and renewable energy to improve the UK and Europe's security of supply.

Centrica pointed out that “significant uncertainties” remain over the rest of the year, including the impacts of weather, commodity price movements and higher bad debt charges.

It added that it was investing over £50 million in 500 UK-based customer service roles in British Gas Energy, 1,000 new UK engineering apprenticeships and providing grants of up to £750 to help customers pay their energy bills.

Other big fallers today included biomass generation firm Drax, which slumped 123p to its lowest level since mid-March at 689p, and Greencoat UK Wind (LSE:UKW) after a fall of 8.7p to 150.4p.

The fact that power generators are being considered for a windfall tax reinforces speculation that one is on the way for North Sea oil and gas producers.

Labour's latest calculations estimate that a one-off incremental 10% tax take in 2022 would raise just under £2 billion in additional taxes, which is up from January's estimate of £1.2 billion following a surge in commodity prices.

According to the Financial Times, the Treasury is working on a plan similar to the supplementary charge introduced by former chancellor George Osborne in 2011, which raised £2 billion. The plan was built around an oil trigger price of $75 a barrel.

For energy giants such as BP (LSE:BP.) and Shell (LSE:SHEL), their geographic diversification provides protection against any UK windfall tax. Along with TotalEnergies (EURONEXT:TTE), the European supermajors account for about 25% of North Sea production and a third of reserves.

Shell chief executive Ben van Beurden told his company’s AGM today that “stable policies” were needed to stimulate investment in the energy of today and the future.

Analysts at Bank of America said last week that a potential windfall tax carried “greater risk to sentiment than financials” given the likely hit of 2% or less of group cash flow from operations, even among the largest producers.

The bank notes that Harbour Energy (LSE:HBR), which is listed in the FTSE 100 after being created last year from the merger of Chrysaor and Premier Oil, accounts for about 14% of total UK output. Its shares fell 18.2p to 428.6p today.