Our columnist considers whether this maker of nuts, bolts and screws is a shrewd investment or a risky punt. 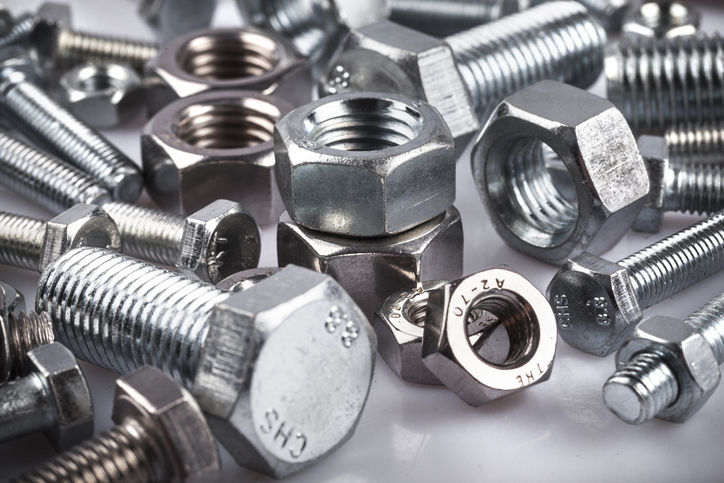 Not for the first year I am wondering whether Trifast (LSE:TRI) is a good long-term investment or a boom-bust stock.

Trifast makes nuts, bolts, screws, rivets and other industrial fasteners under the TR brand and also distributes fasteners made by other manufacturers.

It may sound mundane but a fastener, Trifast says, is an engineering challenge like any other component, and you only need one to shake loose to see how disruptive defects can be.

Three-quarters of the fasteners are made to customers’ or TR’s own specifications, which means, the company says, these products are high value and not priced as commodities.

The more complex fasteners, about a third of all sales, are made in TR’s factories and it works with customers on engineering, design, specification, manufacturing and quality testing, managing the supply of fasteners and delivering to the production line if customers require it.

By collaborating over engineering and managing inventory, Trifast develops close and longstanding relationships with customers, historically in the automotive, domestic appliance, and electronics industries. They are large multinationals, famous names, and their immediate suppliers.

Trifast believes its ability to supply across Europe, North America and Asia, often from local manufacturing facilities, is a competitive advantage.

The long-service of its many employees, often trumpeted in Trifast’s annual reports, backs up its claim to treat staff like family. These employees probably delight customers, but high levels of profitability come and go.

When customers are making fewer cars and washing machines they order fewer fasteners, yet Trifast still bears the high fixed costs of factories and warehouses. This means profit reduces more than revenue, which is why, measured in decades, Trifast’s share price has moved up and down rather than from bottom left to top right as long-term investors would prefer. 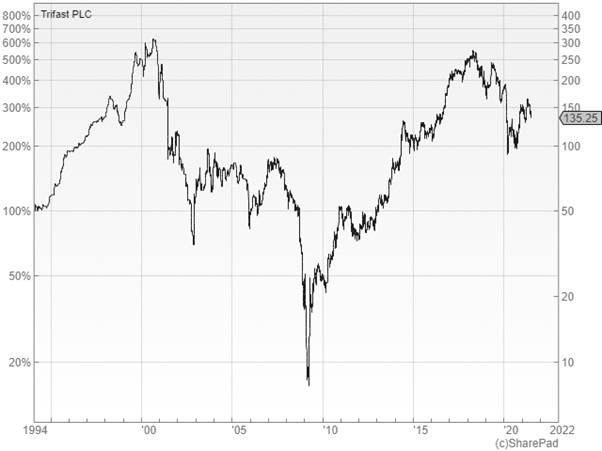 The difficulties Trifast experienced in 2008 were extreme, the result of a combination of an unfortunately timed build up of stock from China due to impending EU anti-dumping duties, lower demand, high fixed costs, and according to the management team brought in to rescue the company, mismanagement.

Since the Great Financial Crisis in 2008, Trifast has reduced its dependency on the electronics industry by beefing up its capability to supply automotive and domestic appliance manufacturers through acquisitions, and until the year to March 2020, it grew profitably.

That year, revenue and profit declined. The closure of factories in the early days of the pandemic did much of the damage, but Trifast was also experiencing a slow down in the automotive market.

The year to March 2021 will be a wonky guide to how Trifast can handle downturns even though it experienced one, because the pandemic did not result in a normal recession.

It closed businesses completely for a while and is still forcing them to work at a reduced capacity. Trifast’s factory in Malaysia, for example, is currently only allowed 30% of its workforce. On the other hand Trifast and its companies received unprecedented support.

Now recovery is fraught too. Freight costs have increased due to rising demand and the unpredictability of lockdowns, which make it difficult for shipping companies to manage capacity and ground passenger airlines that also carry freight. Some raw materials and components are in short supply.

Revenue declined 6% at Trifast and adjusted operating profit declined 27%. For the first time in nine years Return on Capital fell to single digits (8%) and profit margins fell to 5%. These figures exclude the costs of an ongoing once in a generation project, Project Atlas, to replace Trifast’s IT systems with the goal of increasing efficiency and therefore profitability. They also exclude the modest cost of redundancies.

Thanks almost in equal measure to money from investors, Trifast issued more shares in a placing in June 2020, and strong cash flows, the company reduced its net debt (cash less borrowings and lease obligations) to nearly zero. 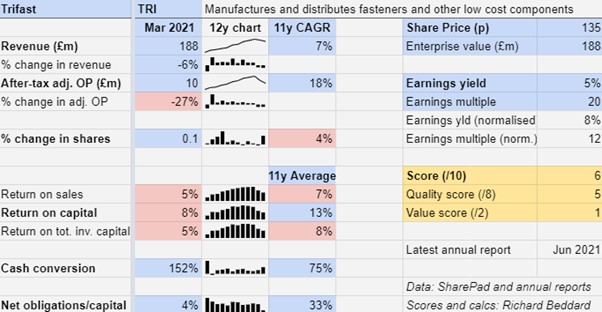 The averages tell a story of modest success. An average profit margin of 7% gives some credence to Trifast’s claim that its products are not commodities but the markup is not particularly impressive.

Trifast says it is always seeking to add value, but the opportunity is more limited than for suppliers of more complex components like XP Power, which sells power adapters to multinational equipment manufacturers using a similar engineering-led strategy. It has achieved an average profit margin of 18% and an average return on capital of 30% (compared to 13% at Trifast).

The company’s minimal debt is unlikely to last. During the pandemic it has been strategising and it plans to become a more aggressive acquirer. By next summer it hopes to have bought a fastener business in North America, by far the smallest of its regional markets.

Acquisitions also bring diversification. Trifast’s most recent, PTS, a UK specialist in stainless steel fasteners is one of the reasons revenue did not fall further in 2021. Stainless steel is particularly popular in medical equipment, the one area of Trifast’s business that grew. The company says it is winning business from electric vehicle manufacturers, and it is going after business in renewable energy.

The goal is to sell more fasteners, more efficiently through scale and superior IT systems. Perhaps this will increase returns and reduce their variability.

But acquisitions come at a cost and Trifast’s 8% average Return on Total Invested Capital, shows that shareholders are enjoying only modest returns from past investment.

The IT project, Project Atlas, has been delayed during the pandemic, and its £15 million projected cost has risen to £17.5m, but the company said it has been piloted and is ready to roll out. The full benefit will not be realised until 2024.

Having made much of the investment, Trifast believes it is on the way to becoming a much bigger and more profitable company, but I still wonder how variable those profits will be.

I am nervous that should scale and efficiency not result in a higher return on capital to fund more frequent acquisitions, Trifast will instead rely on more debt, or more capital from investors.

The strategy itself, to add value through engineering and design and diversify across a variety of industries, is worthy. But Trifast supplies less than 1% of the global market, and I am not sure it can afford it while generating higher returns for shareholders.

Despite these doubts, I want Trifast to succeed. It has a positive story to tell:  fasteners are not only vital, they are also environmental because they allow equipment to be opened up for repair, and the company treats people well.

Trifast’s 1,300 employees rate the company highly in surveys, and more importantly, they stay around: 11.5 years on average.

What could stop it growing profitably? [1]

?      Reliance on external funding for acquisitions/investment

How does its strategy address the risks? [1]

+  Explains itself well to investors

?   Yes. A share price of 135p values the enterprise at about 12 times normalised profit or 20 times adjusted profit in 2021. Adjusted profit  is surely depressed.

A score of 6 out of 9 suggests Trifast probably is a good long-term investment but I am not as confident as I would like to be about that verdict.

Richard Beddard is a freelance contributor and not a direct employee of interactive investor. He owns shares in Trifast.

The investment trusts dangerously close to their private stocks limit