War is boosting prospects for the aerospace industry, but there’s little good news for Rolls-Royce. Our City expert reports. 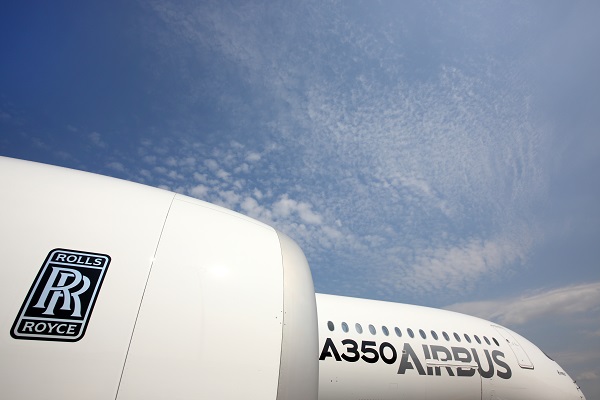 The recovery hopes of Rolls-Royce Holdings (LSE:RR.) investors were dealt another blow today after a major City bank reduced its price target on the engines giant by almost half to 75p.

The ‘underweight’ recommendation from JPMorgan analysts sent shares 5p lower to below 90p, meaning the stock has lost well over a quarter of its value this year.

The protracted recovery of civil aerospace flying hours hasn’t helped the company’s turnaround, but it was caution over the outlook for profitability in new markets such as small modular reactors that provided the trigger for today’s downgrade.

At 90p, Rolls is worth less than £8 billion and trading at exactly the same level as the price paid by banks for leftover shares in November 2020’s heavily discounted £2 billion rights issue. That fundraising offered existing investors the chance to buy shares at 32p a share.

The shares were 146p in November, but have fallen on economic and leadership uncertainty after chief executive Warren East announced plans to stand down at the end of this year.

Another of the UK’s industry heavyweights is moving in the opposite direction, however, as BAE Systems (LSE:BA.) shares rose another 1% to take gains for this year to 38%.

The latest improvement, a rise of 8p to 773p, came as Deutsche Bank backed further upside through a new price target of 860p, which it based on the prospect of higher organic growth and improved free cash flow generation.

Analyst Christophe Menard says: “The war in Ukraine has resuscitated the need for military platforms that encompass high-technology components, such as tanks, fighter jets, submarines and surface vessels.

“BAE Systems remains ideally positioned, with 41% of sales exposed to platforms and 21% to electronic systems. The group's 35% exposure to short-cycle business and services also positions it to benefit from an early ramp-up in spending.”

BAE was joined on the blue-chip risers board by BP (LSE:BP.) after the price of Brent crude returned above $100 a barrel, while there were also decent performances in the retail sector by JD Sports Fashion (LSE:JD.), Next (LSE:NXT), B&Q owner Kingfisher (LSE:KGF) and Burberry (LSE:BRBY). Electro-components also returned to form with a gain of 10p to 1018p, having earlier forecast a full-year profit margin towards the top end of City hopes.

The wider FTSE 100 index stood about 0.5% lower and was little moved by this afternoon’s figures showing a slightly bigger-than-expected annual rate of US inflation at 8.5%.

Despite this being the highest level since 1981, Wall Street is clinging to hopes that inflation is nearing its peak after core prices came in lower than expected. US interest rates are still on course to rise by a half percentage point next month, but the latest data at least provided some respite after recent selling pressure in the Nasdaq.

The FTSE 250 index fell 166 points to 20,951, with the uncertain consumer outlook putting pressure on the valuations of Premier Foods (LSE:PFD) and TUI (LSE:TUI).

Against that, controls and seals specialist Diploma (LSE:DPLM) jumped 9% or 234p to 2,746p, after unveiling a profit upgrade as well as two acquisitions. Fast fashion business ASOS (LSE:ASC), which is large enough for inclusion in the FTSE 250 index after its move from AIM to the main market, rose 87p to 1625p as its interim results reassured investors following a turbulent 2022 so far.

Despite supply chain constraints and stock availability issues, ASOS met its earlier guidance by posting 4% revenues growth and £14.8 million of adjusted profits. Analysts at Liberum, however, warn that “risks loom larger” as they cut their full-year profits forecast by 30% to a level well below the company’s guidance.

Liberum has also lowered its price target from 2,300p to 1,700p, adding that it is disappointing not to get an update on the appointment of a new chief executive. It writes: “Considering the valuation there is the potential of a bid for the company, hence the ‘hold’ recommendation, but with earnings momentum likely negative we cannot see a positive catalyst.”