Rising levels of inflation and higher interest rates are headwinds for tech shares, but the pros argue that it would be a mistake to bet against the biggest names in the sector. 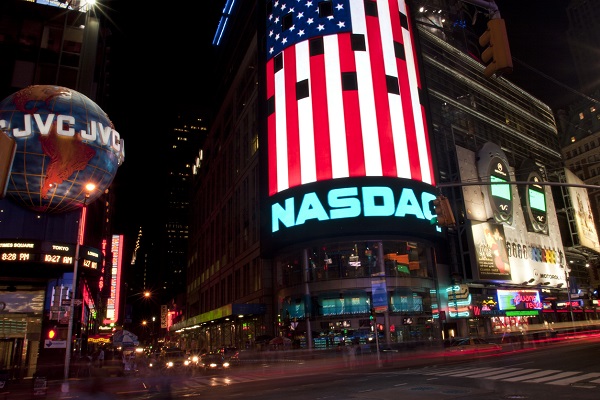 Over the past decade, growth shares have notably outperformed value shares, as our chart below shows.

The big performance gap has largely been attributed to low interest rates, which have made growth stocks more alluring, as the expected future earnings of such companies, when measured against the low cost of borrowing, look more attractive.

However, experts argue that the tide has now turned as central bankers tighten monetary policy.

Value shares, which tend to be cyclical, are viewed as a better bet than growth shares to profit from both the post-pandemic economic recovery and higher interest rates. Such companies offer ‘jam today’ as their valuations are not based on producing high profits in the future.

Meanwhile, technology and other growth shares are ‘jam tomorrow’ stocks, as their more expensive valuations are hinged on future earnings potential. Such companies are negatively impacted by high inflation and a rise in interest rates because both devalue their expected future earnings. 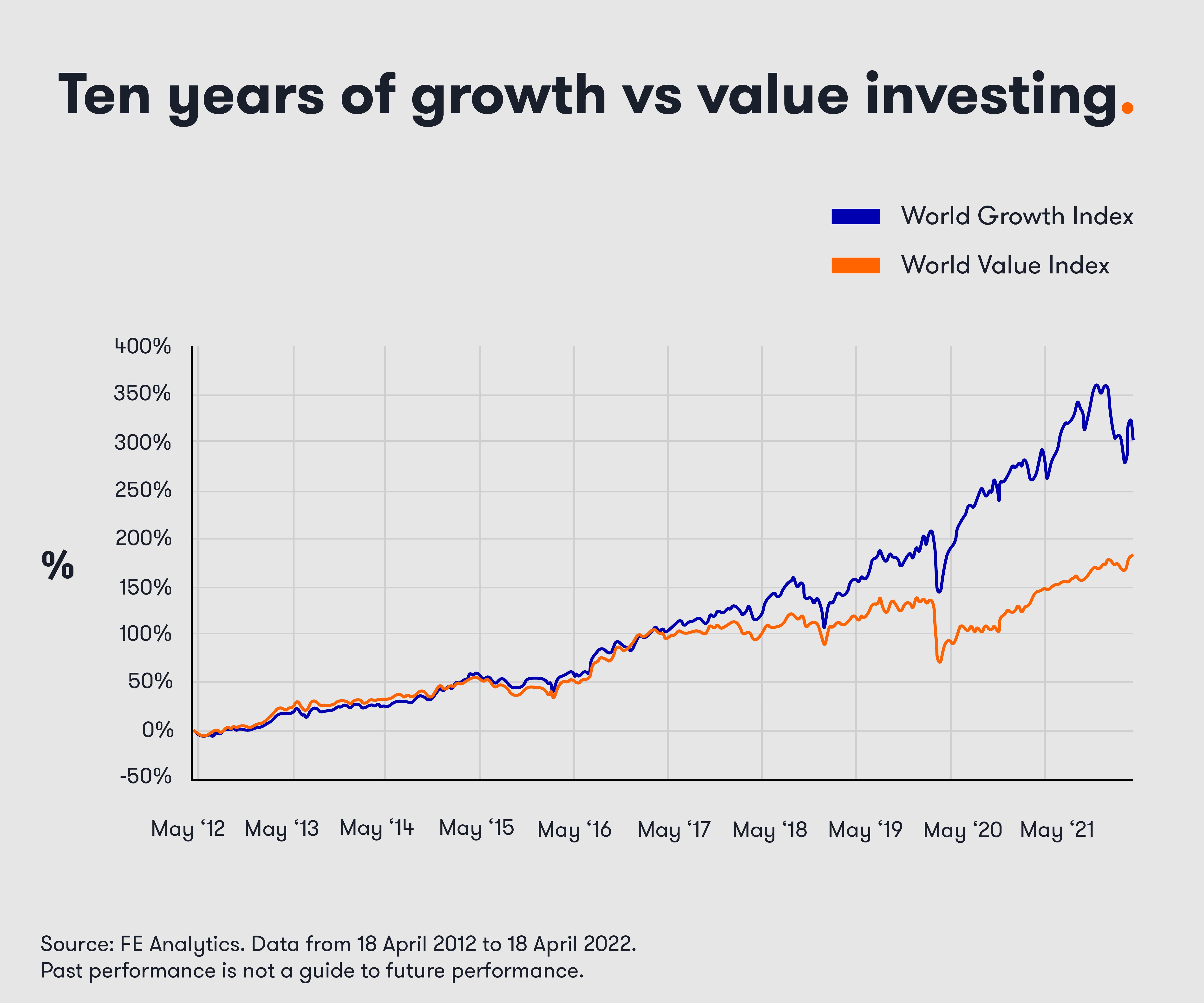 Since the start of 2022, there’s been a market rotation into value shares at the expense of growth shares. Data from FE Analytics shows a notable performance gap between the two investment styles in the first quarter: the MSCI World Value Index returned 2.9% versus a loss of 6.6% for the MSCI World Growth Index.

As a result, the performance of value funds has been turbocharged, while for growth strategies it has been a headwind, including for funds and trusts managed by Baillie Gifford such as Scottish Mortgage (LSE:SMT), as well as Nick Train’s Lindsell Train Global Equity and Terry Smith’s Fundsmith Equity.

The trio have been ‘sticking to their knitting’, which is what investors would expect them to do. Each has built strong reputations – through delivering stellar market-beating performance – by specialising in finding best-in-class growth companies. Given that they are stock pickers and not playing the macro trends, the market rotation will be seen as an unhelpful headwind rather than a call to action to switch into value shares.

Other funds are less wedded to an investment style. Such funds have more flexibility to change tack, and some have been shifting some money out of growth shares.

Two fund managers who invest in global shares and have been doing this, are James Thomson and Simon Edelsten, who respectively manage Rathbone Global Opportunities and Mid Wynd International (LSE:MWY). interactive investor has recently interviewed both and you can watch the interviews here.

Both fund managers said they wanted a better balance in terms of investment style in their funds in response to the market rotation under way.

However, in both cases tech shares are being trimmed rather than ditched. Both fund managers point out that it would be a mistake to bet against the biggest names in the tech sector due to their resilient business models.

Thomson’s view is that the one-sided dominance of tech and growth strategies is starting to fade.

In a recent video interview (links below), he said: “Growth has outperformed almost without challenge for the past 15 years. And I think some parts of the market have been so starved that a period of catch-up has been likely for some time.

“I think we're really getting back to an investing world that isn't so binary anymore.”

Over the past year, Thomson has moved around 15% of the portfolio out of growth shares. Some of the proceeds have been used to buy banks for the first time in five years, specifically US regional banks.

However, Thomson is continuing to back three big US tech giants, which are all top 10 holdings in the fund: Microsoft (NASDAQ:MSFT), Alphabet and Amazon. Thomson described the trio as “gold standard growth companies” that will continue to be winners.

Rather than moving money into value shares, Edelsten has been reducing exposure to the highest growth shares in the portfolio. He explains: “We bought other quality stocks, but on much, much lower valuations against current cash flow. And that's given the fund good balance. It's protected against some of the falls that you've seen in the market in the last three months.”

As an example, Edelsten highlighted that he sold PayPal (NASDAQ:PYPL) and bought Nippon Telecom, the biggest phone company in Japan. When he sold PayPal, the firm was on a price to earnings multiple around 60 to 70 times, whereas when he purchased Nippon Telecom it traded at around nine times earnings.

Edelsten is also continuing to back Alphabet and Amazon, the top two holdings in the portfolio. Just outside the top 10 is Microsoft. In a recent video interview with interactive investor (links below), he said that big tech shares should be able to pass on inflation, given their market dominance. Edelsten also pointed out that their valuations are not unreasonable.

He said: “Most of technology is still expensive to our mind, but some of the older stocks have grown into their valuations and actually offer quite a safe haven-type, stable defensive investment opportunity.”

Gerrit Smit, who manages the TM Stonehage Fleming Global Best Ideas Equity fund, invests in high-quality growth shares. He is sticking to his knitting, but has been switching some exposure in the healthcare sector. “There’s been a very sharp market rotation, and in light of this, one thing we have done in response is not invested cash (inflows) that’s come into the fund. Within the portfolio we have been moving money from healthcare shares with high valuations to those with lower valuations.”

Smit, though, is continuing to back big tech, with Alphabet, Microsoft and Amazon accounting for nearly 20% of the fund. He said: “Our fear is if we take them out, we will not be able to get them back much cheaper. I would also not know who to exchange them for.

“I am more certain about the continued growth of big tech than some consumer staple businesses, such as drinks companies.”

Smit thinks that it is only a question of time until the market moves back to favouring high-quality growth shares, including tech. He thinks the prospect of sluggish economic growth could be a catalyst for this to happen.

He added: “Positive perceptions of economic growth was a key driver behind boosting value shares in November 2020 when the vaccine breakthroughs were announced. However, going forward I am not optimistic on economic growth, I think it will continue to be sub-par.”

Also of note is that Terry Smith bought Alphabet shares for the first time in February this year, and Amazon shares in August last year.

The portfolio has 27.1% invested in “technology”, including top holding Microsoft, Facebook-owner Meta and PayPal. The only tech giant he does not own is Apple.

While the big tech stocks are widely held, not everyone is a fan. Felix Wintle, fund manager of the VT Tyndall North American fund, has not held any of the FAANG stocks since October 2020.

He says: “In hindsight we sold a bit too early. However, the market backdrop now is that what has worked well over the past decade is no longer performing well. I think there are better opportunities elsewhere and that going forward there will be other stocks that lead the market.”

As we have previously stressed, a prudent approach is to back both styles; value and growth. Doing so, will help investors achieve diversification, which will reduce the risk of a portfolio being lopsided.

John Husselbee, head of multi-asset at Liontrust, has a “foot in both camps” to achieve a healthy balance of risk and reward.

Husselbee says that in a reflationary environment, a term used to describe a combination of both the global economy and inflation rising sharply at the same time, he expects to “see tailwinds for value, developed markets ex-US and small-cap stocks”.

He adds: “However, these outperformances will not all come at once, so it is sensible to retain diversification in portfolios rather than gambling that one particular thesis pays off.

“Looking at funds held across our portfolios, in UK equities for example, our positions include Evenlode Income, a high-quality, concentrated strategy with a focus on high and consistent ROICs, and JOHCM UK Equity Income, a high-yielding small and mid-cap fund.

“In the US, we own Ossiam Shiller Barclays CAPE US Sector Value, an ETF based on Shiller’s CAPE (cyclically adjusted PE) metric and skewed towards the four most undervalued sectors on a monthly basis, and Loomis Sayles US Growth Equity, which focuses on pragmatic quality-growth opportunities to hold over the long term. As for Japan, our holdings include the deep value Man GLG Japan CoreAlpha and the quality growth-focused Baillie Gifford Japanese."