A flurry of potential discount opportunities have opened up. Kyle Caldwell reports. 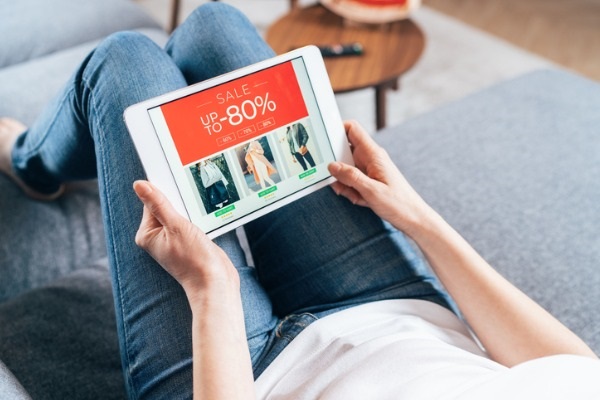 For much of this year, investment trust bargains have been in short supply as markets have generally ticked upwards, but greater caution among investors in recent weeks has opened up some potential opportunities.

Inflation is top of the worry list and causing concern among both fund managers and private investors. The hope, particularly among central bankers, is that the price increases prove to be transient; caused by a combination of the rapid post-pandemic economy recovery and bottlenecks in supply chains in certain sectors.

However, if inflation proves to be more persistent, sooner-than-expected interest rate rises could follow, which will be a headwind for both stock markets and bond markets.

This has led to some risk being taken off the table in the open-ended fund universe. The latest statistics, for August, show that three of the top five selling sectors house funds that invest in a defensive manner: short-term money market, volatility managed and targeted absolute return.

In the investment trust sector, there are signs of investors becoming more bearish regarding where markets are heading over the short term, a point acknowledged by Simon Elliott, head of research at Winterflood Securities, who says: “There’s been a number of short-term share price de-ratings, which has caused discounts to widen. This reflects general wariness among investors at the moment.”

The first trust to mention, which featured in Andrew Pitts' trust tips, is Finsbury Growth & Income (LSE:FGT), which is managed by Nick Train. The trust is very active in buying back its own shares to keep its discount close to par, therefore a discount of -3.9% versus -0.9% for its 12-month average is not a frequent occurrence.

Some investors have already moved to take advantage of the discount, with FGT entering investor investor’s top 10 most-popular investment trust table in September.

Over the past year, the trust, which is jam-packed full of consumer goods multinationals, has notably lagged peers. The average UK Equity Income trust is up (in share price total return terms) 30% versus 4% for FGT.

Another trust that has fallen out of form of late is Edinburgh Worldwide (LSE:EWI), which invests in global smaller companies. Manager Douglas Brodie, in common with other Baillie Gifford funds and trusts, has a growth bias and a preference for businesses making clever use of technology.

Long-term shareholders will surely have no complaints. As the chart below shows, its five-year performance has been stellar, with returns of 197%. It was also a star performer last year, in the top 10 overall trust performers having returned 70%. 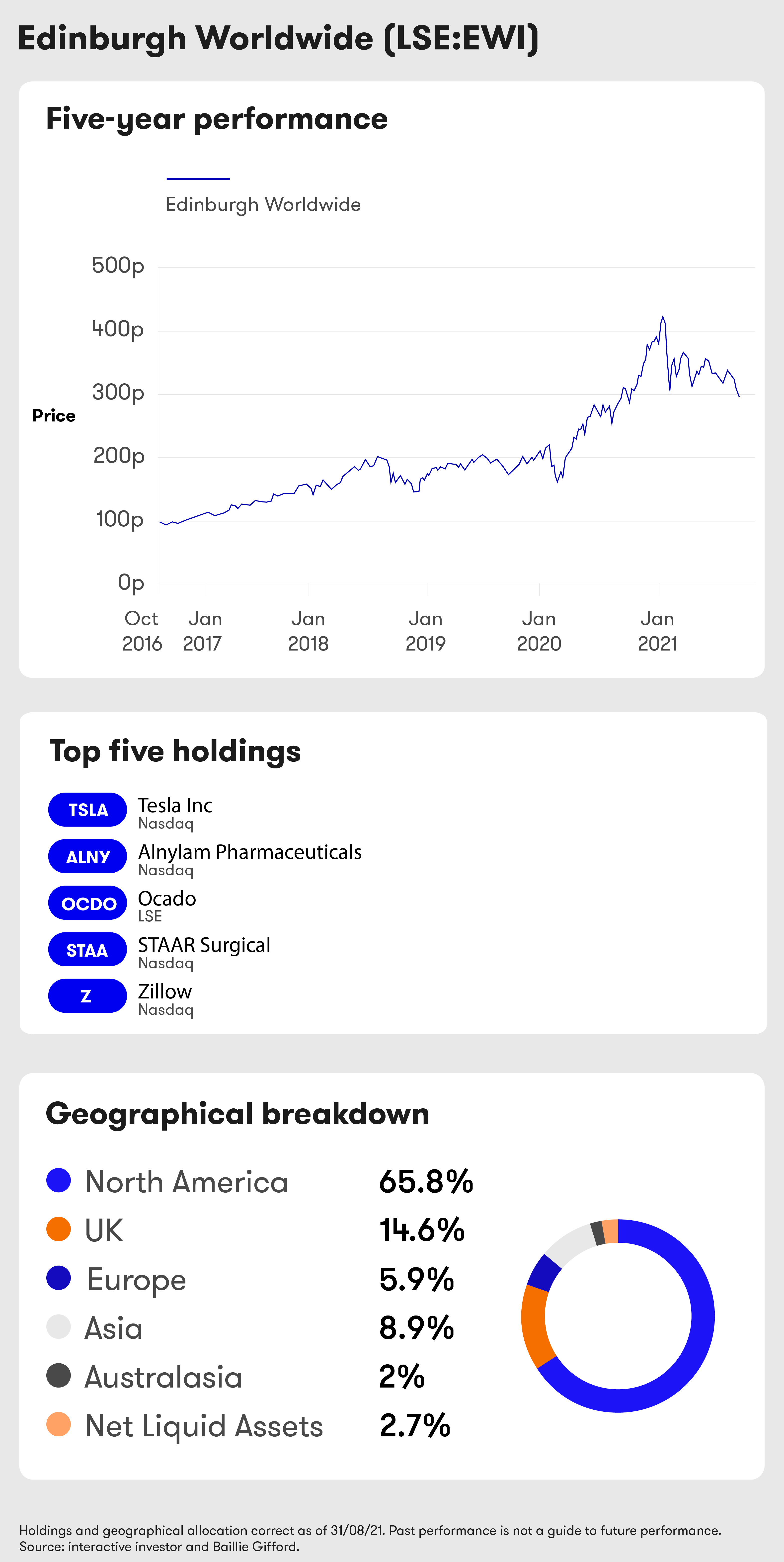 But, over the short-term, performance has come off the boil, with a 7% NAV decline over the past three and six months. The share price fall is steeper over those periods, with losses of 12% and 16%. This is a reflection of the trust no longer commanding a premium and falling on to a discount. EWI shares can now be picked up on a -8.3% discount. Over the past year, the trust has typically traded on a small premium of 1.1%.

“Its investment style and areas of focus have not been in favour over the short term, but the management team will not be worried as they are long-term investors. For investors adopting the same long-term approach, now could be an attractive opportunity given it has tended to trade on a premium over the past year,” says Elliott.

Numis analyst Priyesh Parmar is also a fan of Edinburgh Worldwide, but cautioned that there could be further short-term pain.

He says: “Douglas Brodie is a quality manager, and has an excellent track record. But it is important for investors to bear in mind that this is a trust that needs to be held for the long term, as it will not always be a smooth ride due to the smaller company and growth focus. It is not inconceivable that discount volatility could continue if the broader market backdrop remains unfavourable.”

Asia and emerging markets trusts have also been under the cosh of late, with China largely to blame following its regulatory crackdowns on certain sectors and the debt crisis of Evergrande (SEHK:3333), one of the country’s largest property developers. Given that China commands large weightings in emerging market and Asian indices, its underperformance in 2021 (with the MSCI China Index down 15% in US dollar terms) has proved to be a notable headwind.

Austin Forey has managed JMG since 1994. He backs well-managed companies at sensible prices and has a strong record in selecting mid- and larger-sized companies.

“The current discount is a reflection of general sentiment towards the emerging markets – trust discounts in the sector have widened across the board. China represents 40% of the emerging markets index and therefore sentiment has been impacted by recent weakness in the market driven by regulatory intervention and the Evergrande crisis,” notes Parmar.

The final trio of trusts trading on wider-than-usual discounts are all housed in the same sector: China/Greater China.

As mentioned above, China’s stock markets have been volatile this year, with many investors questioning whether the regulator crackdowns in recent months means the country is too risky to invest in due to its unpredictable politics.

All three trusts are in the red over one month, three months, six months and one year in both share price terms and the NAV.

Parmar points out that China is hard for investors to ignore, and for those who are looking to increase their exposure, China-focused trusts currently look attractively priced.

“China is not without risk, but it is home to some of the most exciting entrepreneurial businesses in the world. There will be volatility, as recent regulatory and political interventions have shown, but for those investors who are looking to allocate to China it is currently an attractive opportunity to do so through China-focused investments, which are all [three in the sector] trading on discounts,” says Parmar.

Fidelity China Special Situations (LSE:FCSS) is trading on a discount of -7.9%, followed by discounts of -7.2% and -5% for JPMorgan China Growth & Income (LSE:JCGI) and Baillie Gifford China Growth Trust (LSE:BGCG). All three have larger discounts than their 12-month averages.

In contrast, last year, on the back of China’s economy and stock market bouncing back from the Covid-19 crisis more strongly than most other nations, the trust trio frequently traded on premiums – a notable one in the case of Baillie Gifford China Growth Trust, which saw its premium hit a high of 34% at one stage following its mandate and management group change. The trusts was formerly Witan Pacific, until Baillie Gifford took over last September.

Numis’ preferred trust in the sector is Fidelity China Special Situations, which is a member of interactive investor’s Super 60 list.

“FCCS seeks to exploit the closed-end structure via its active use of gearing, as well as exposure to mid/small caps and unquoted firms. We believe it is an attractive vehicle for investors who are comfortable with the risk profile and the manager’s contrarian approach. Additionally, there should be limited downside to the discount due to the board’s discount control policy,” says Parmar.

The six trusts that are looking cheap

Source: Winterflood. Discount and premium figures sourced at close of trading on 12 October 2021.