The blue-chip index has hit its highest value for two years and is finally enjoying time in the sun again as booming commodities and banks reward investors, reports our City analyst. 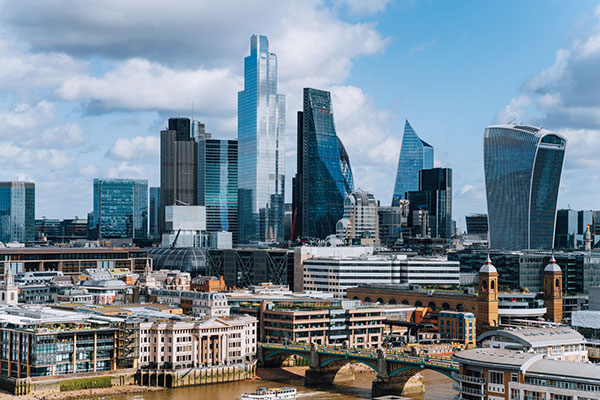 “Old economy” stocks continue to shelter investors from storms elsewhere after the FTSE 100 index today hit a two-year high as one of the best-performing benchmarks in 2022.

The 3% rise so far this year goes some way to silencing complaints about the lack of “big tech” exposure in the FTSE 100. Now as interest rate worries cause a rotation away from growth stocks, companies with the pricing power to withstand inflationary pressures are all the rage.

This was highlighted today when a rise in commodity prices helped boost shares in miners including Glencore (LSE:GLEN) and Anglo American (LSE:AAL) by 3%, while BP (LSE:BP.) rallied 1.5% after its annual results showed the bigger-than-expected impact of oil prices now above $90 a barrel.

Today's peak marks a 48% improvement on 23 March 2020, although prior to this year's outperformance London's blue-chip pandemic recovery had been one of the slowest.

Now the tables have turned as central banks including the Federal Reserve and Bank of England accelerate monetary tightening in order to get a grip on significant price pressures in 2022.

The FTSE 100 index currently stands third in the global league, only beaten by markets in Brazil and Hong Kong, after a 3% rise so far in 2022. The tech-focused Nasdaq 100 is near the bottom of the pile after a 10.7% decline, while there's been a 13% reversal for the AIM 100.

As our AIM columnist Andrew Hore points out, it appears that investors are seeking value and recovery potential rather than the more speculative investments seen in the junior market.

The FTSE 250 has also struggled to live up to last year's blistering pace, falling 7% in 2022 as cost-of-living pressures cause anxiety for consumer-focused stocks. The second tier also has a significant number of technology-focused investments, ranging from Darktrace (LSE:DARK), Auction Technology Group (LSE:ATG) and Trustpilot (LSE:TRST) to Baillie Gifford US Growth (LSE:USA) trust.

The renewed appeal of the FTSE 100 also reflects an overall dividend yield that topped 4% in 2021, compared with the 1.3% found in the US and 2.8% for the eurozone.

BP, for example, offers income-seeking investors a yield of 3.9%, with the oil giant today promising investors dividend growth of 4% through to 2025 as long as Brent crude stays around $60 a barrel.

The price is currently above $90 a barrel, with surplus cash flow of $6.3 billion likely to mean BP executes another share buyback worth $1.5 billion prior to its first-quarter results in April.

The potential for buybacks and special dividends is also lifting interest in London's banking and financial sectors, particularly with another three UK rate rises in the pipeline this year to boost margins. The momentum comes at a time when unemployment remains low and banks appear to have more than sufficient capital and reserves.

UBS analyst Jason Napier made the case for UK banking shares last month when NatWest (LSE:NWG) became his seventh buy recommendation out of eight stocks in his coverage.

Lloyds Banking Group (LSE:LLOY) shares have already risen 10% so far this year, but the pandemic recovery of this widely-held stock has lagged its UK peers Barclays (LSE:BARC) and NatWest after they more than doubled in value between 23 March and the end of 2021. In all, 27 stocks achieved this feat during the period, led by gaming group Entain (LSE:ENT) following a rebound of 356%.